Biography of the Rebbe Rashab 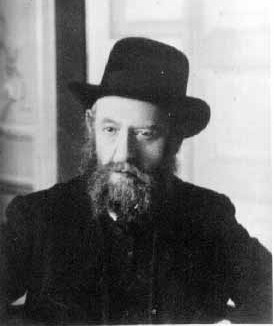 A mystic of the highest order, the Rebbe Rashab authored the most comprehensive documents on mysticism to date, elegantly outlining the mystical infrastructure and its application to our lives. He wrote over 1500 discourses (‘maamorim’), totaling over 50 published volumes of teachings and responsa. Rabbi Sholom Dovber was a Rebbe – a leader – to thousands. He worked tireless on behalf of the Russian Jewish community during the difficult period of transition from Czarist Russia, through World War I, to the Russian Revolution. Recognizing the coming turmoil of the 20th century, in 1887 the Rebbe Rashab established Yeshiva Tomchei Temimim, dedicated to educating a new generation of young leaders to launch a spiritual revolution.

Biographical Highlights:1
1860: Born on 20 Cheshvan to the Rebbe Maharash and Rebbetzin Rivkah.
1875: Marries his cousin Rebbetzin Shterna Sara.
1880: Begins his work in public affairs.
1883: Begins guiding the Chassidim and accepts the post of Rebbe after the passing of his father in 1882.
1892: Endeavors to have the expulsion from Moscow rescinded; provides substantial financial subsidies to enable those expelled to settle in new places.
1893: Re-establishes the committee of communal affairs in Petersburg.
1897: Establishes Yeshivot Tomchei T’mimim.
1901: Visits Germany, France and Holland on communal concerns.
1902: Helps establish a factory for weaving and spinning wool, which provides 2,000 Jewish families with ample livelihood.
1904: Establishes committees to send matzot to Jewish soldiers in the Far East during the Russo-Japanese War.
1906: In Petersburg, successfully endeavors to halt the pogroms raging in Russia.
1911: Establishes Yeshivas Toras Emes in Chevron, Israel.
1915: Due to World War One, leaves Lubavitch and moves to Rostov, on the River Don.
1920: After Shabbat ends, on the eve of 2 Nissan, he passes away and is interred in Rostov. His only son, Rabbi Yosef Yitzchak, known as the Frierdiker Rebbe, succeeds him as Rebbe.

(Rough translation of an excerpt of maamar one)

…It is known that the reason for the creation and the sustenance of the worlds, and the purpose of the soul descending in a body, is in order to draw down the revelation of the Infinite Light (Or En Sof) into this world through Torah and Mitzvot. And this is the concept of the unification of the transcendence of G-d (sovev kol almin) and the immanence of G-d (mimalei kol almin). As we say before every mitzvah, “For the sake of the union of the Holy One, blessed be He, with His Shechinah,” which is the aspect of the integration of the sovev kol almin and the mimalei kol almin. This is the drawing down of the revelation of the Essence of the Infinite Light (Atzmus Or En Sof) which is the ultimate purpose of the existence of the worlds and the descent of the soul.

As it says [Midrash Tanchumah Naso 16]:

“G-d had a desire to have a home in the lower world.”2

And like the home of a person, by way of an analogy, the essence of a person lives in his home.3 The same thing is above so to speak, the Essence of the Infinite Light of G-d is revealed below.4

As it says in the beginning of Eimek HaMelech5 (The Depth of the King):

“The creation of the worlds happened through the first tzimtzum6 that took place in the Infinite Light. And it left a hole (chalal) and a space (makom panoi), and this [vacuum or space that was created] is the source of the coming into being of the containers (kelim)7 and the existence of all the worlds.”

And the general worlds that are structured in a form of light and vessels (orot ve kelim)12 are within the chalal and makom panoi that remains after the tzimtzum.

And seemingly it’s not understood: What is new about this: also before the tzimtzum the light filled the entire space!

One can say that this idea is as it states in Eitz Chayim16 [on another topic]: Regarding the idea of the revelation of the kav, if the kav would have remained in the beginning, there would have been no potential for the existence of containers. After the creation, the light of the kav can shine in them without them being overwhelmed. Similarly, regarding the general light before the tzimtzum, after the creation of the worlds, they [the containers] are able to receive this light.

And one can say that an example for this is like the transmission of intelligence or knowledge from a teacher to a student. If in the beginning the teacher were to give over to the student the inner depths of his wisdom, the student would not be able to receive it. The teacher has to give over a limited light that is proportionate to the capacity of the student. After the student receives this diminished light and contains and integrates it in his mind, then afterwards he can come to the depth and innermost aspect of the intellect of the teacher (the sages say that [at forty] the student comes to the knowledge (daas) of the teacher) and he can receive it etc.

And one has to say that this is also because of the fixing (tikkun) of the keli. When a person begins to understand, the vessels of the mind begin to be repaired and refined. As it is known that when a teacher teaches a student with a lot of influence, the skills of the student become like those of the teacher.

And this example can be used to understand that after the creation of the worlds the light of the kav shines into them. It’s also known that the per17meating light [of the kav] polishes the keli from within, and the surrounding or transcendent light polishes the keli from without. And that’s why afterwards the kelim are able to receive light that is even higher than the revelation of the kav.

And the main thing is that this flow is through the Torah as it is written, “G-d gives strength [to His People]” and “There is no strength except Torah,” because through Torah the tzadikim are able to receive the Infinite Light that is higher and transcends the world without annihilating their existence. And the same with the worlds, they are able to receive the light through this, as it says in Tanya chapter 36.

So we see from this, that even though this light [that enters into existence] is the same light th18at filled the challal before the tzimtzum, however, the innovation is that the light is revealed in the worlds.19

And another explanation [regarding the innovation that is accomplished] is that there will be a revelation of light that is greater than the light that was there before. And these are the additional lights that are drawn down [and revealed] through Torah and Mitzvot. And these [lights] are of the innermost aspect and essence of the Infinite Light, which are even higher than the light that filled the challal [before the tzimtzum], as will be explained later.

And generally speaking, this [new dimension of light] is the revelation of the Infinite Light, sovev kol almin. And this was the purpose for the creation of the worlds.20 ….

Hemshech Samech Vov – View a summary of the 61 discourses that comprise this landmark maamar.

Cant get enough of this funky stuff.

We are looking forward to more of Samech Vov….

As always, you have the ability to take very sublime concepts in Chassidus and Kaballah and bring them to our understanding.
Thanks and yishar kochacho. Keep bringing the good stuff down for us.

BH your doing a great project.
Keep to the project.
Hafotzas hamaayonos to a totally new level.

Infinitely wonderful and mega-enlightening. Very very wise and insightful. Full of compassion, meaning, etc. One of the greatest literary works ever.

Thank You for the information of the Rebbe Rashab