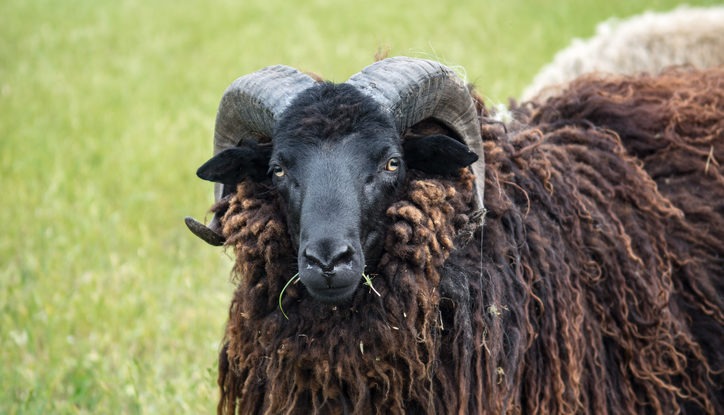 An entire section of this week’s Torah portion is dedicated to… sheep. In the poetic words of my dear friend and colleague, Yanki Tauber, adapted from the Rebbe’s teachings: This week’s Torah reading, Vayeitzei (Genesis 28:10–32:3), is veritably glutted with sheep: Laban’s sheep and Jacob’s sheep; white sheep, dark sheep, spotted sheep, speckled sheep, sheep with rings around their ankles. Jacob arrives in Charan, and the first sight to greet him is that of several flocks of sheep congregated around a sealed well; the second is his future wife, Rachel (the name is Hebrew for “sheep”), shepherd her father’s sheep. Soon Jacob is a shepherd himself, caring for sheep, receiving his wages in sheep, breeding sheep with special markings, dreaming of sheep, amassing a fortune in sheep, and finally leading his flocks back to the Holy Land where he will present his brother Esau with a huge gift comprised largely of… sheep.

In the continuing essay, the Rebbe explains the significance of sheep in our relationship with G-d. But what is the meaning behind the different type of sheep that Jacob breeded: Akudim, nekudim, verudim, ringed, spotted and speckled sheep? Why did Jacob invest so much of his time in producing these sheep, and he insists that they become his reward in return for all his labor for his cunning, swindling father-in-law, Laban?

Clearly there is more than meets the eye in this sheep episode. Especially when we read the vision of Jacob – which he shares with Rachel and Leah – of ringed, spotted and speckled animals. And this vision is repeated twice (31:10; 12), and it becomes a sign that G-d “has seen all that Laban is doing to you.” What is the deeper meaning of Jacob’s vision, and why is it that these different types of sheep become the source for “tremendous wealth,” as well as the sign of G-d protecting Jacob?

All things physical are actually reflections or manifestations of their spiritual counterparts.

Akudim: The rings are bound forms of energy (‘akud’ in Hebrew means bound). The world of akudim is a very early stage in the cosmic order where the ten sefirot – the building blocks of existence – are “ten energies (orot) bound in one container (keli).” The ten emanations are so intense that they cannot yet be distinguished as ten individual forces, and the ‘container’ is just beginning to emerge. Like a seed in its earliest budding stage, the container is tiny, but within it lies concentrated all the energy and details which will in time emerge.

Nekudim: The spots (or dots) are isolated points (nekudah in Hebrew means ‘point’). The world of nekudim is the next stage in the cosmic order, in which the ten sefirot exist as isolated, uncoordinated points of energy. As this stage the energy (light) has become
somewhat diminished and is not as intense as in akudim, hence, ten distinct points; the containers have now matured and are no longer just one single container, but they have developed personality. Yet, in this world – also called the world of tohu (chaos) – the energy is still too intense for the containers, and being that they are uncoordinated energies the containers are unable to contain the intensity of the energy and they shatter (shevirat ha’keilim).

Verudim: The speckles are combined colors (see Zechariah 6:3. Ohr HaTorah Beshalach p. 395) or interconnecting stripes. As Rashi explains verudim: “A white thread encircles his body all around, and its stripes are open and penetrating from one to the other.” At this third stage in the cosmic order the world of verudim – also called ‘tikkun’ and ‘atzilut’ – the energies and containers mature to the point of harmony and coordination. They are no longer ten isolated points, but are one interconnected ‘network’ of sefirot, all working together. Hence, the name ‘tikkun’ they have the power to repair the ‘shattered containers’ of nekudim. The energies in verudim are weaker per se than those in nekudim, and the containers are stronger, yet this is what allows them to fuse with each other. Instead of only two opposing forces in nekudim, the third dimension is introduced, that like a spine, supports and unites the entire structure. (This is also the essence of beauty, see last week’s article).

The Arizal explains, that these three worlds are a result of what “Laban is doing to you,” because “Laban is the secret (‘sod’) of the supernal whiteness (‘loven ha’elyon,’ loven in Hebrew means white) that preceded all these emanations, and he (this level of Laban) is the ‘doer’ of (i.e. the source that made) all these levels, akudim, nekudim, verudim necessary for Atzilut which emanates after them and is called by the name Jacob.” Jacob is the one that reveals the “supernal whiteness” into the three worlds of akudim, nekudim, verudim.

This is why Jacob invested so much of his time and energy in mastering these three stages of psycho-spiritual development. He understood very clearly that the true reason for leaving his parents in Israel (Beersheba, the fountain of seven) and coming to Charan and building a family there – to enter the inferno of Laban’s home in a city called “wrath of G-d” (Charan) – was not to just leave unscathed. The only redemption in enduring all the pain and humiliation was that he would build more than just a physical family; he would come away armed with the secret of eternity: How to master living in a difficult, corrupt material world and transform it. Not only how to survive and remain uncompromised, but how to integrate the universe with higher purpose – with G-dliness. How to fuse the containers and the energies.

This was the great wealth that Jacob amassed in Charan, and this was the promise he received from G-d that He sees “all that Laban is doing to you.” Jacob learned the secret and even more importantly, he shared it with Rachel and Leah and passed it on to all of us.

And what is the secret?

The secret is understanding – even seeing, as in Jacob’s vision – the genesis of it all. All wisdom is about getting to the root of any given phenomenon. Jacob saw how it all comes to be. To defang the perceived adversary we must learn its source of power.

Akudim, nekudim, verudim is the inside story of all that exists. When something comes to be, first it begins as an intense form of energy, not yet shaped, defined. Like a seed just fertilized, like a fetus in its first moment of conception, like the spark of an idea just spawned. Concentrated energy, including all the details to come, held in a miniscule container.

Then, the entity begins to grow, but will always go through an awkwardness, a tension that can even lead to chaos and upheaval, to the point of shattering. Too much energy, too little seasoning. Many drives, little focus. Passion without direction, intensity without grounding and coordination.

This stage is necessary, it is a form of adjustment – a so called “market correction” – necessary to realign and readjust material reality with Divine reality. When seen in its full light, the destruction of tohu is in order to build something greater. Like the razing of a building in order to build a greater one in its place. Like the deteriorating seed that allows the fruit to bloom. Or the death of the cocoon so that the butterfly can emerge. We need to shed one layer of skin in order to assume a new one.

Then we come to the third stage where we achieve balance and integration. The energies learn to coexist and complement each other. The containers and the energies become acclimated to one another. One union is forged out of the many diverse forces. Hiskalilut (coordination) as opposed to hischalkut (division).

Just as the large universe came into being through these three stages, so too is it with the small universe, the human being, a small universe in microcosm (olam koton zeh ha’adam). Each of us needs to go through all three stages and master all three of them. The objective is verudim, but for verudim to be healthy we need the first two stages as well.

So, after all is said and done, there is much that we can learn from Jacob’s tending the sheep. Jacob spent his days in the fields learning the mysteries of existence from simple sheep. We, his children, are given these mysteries as a gift – tools that help us live our lives.

There are so many ways that Jacob’s sheep can be used in dealing with life’s challenges. We can apply them to the way we love each other and our children, and the way we intervene in confrontational situations, even the way we analyze the global clashes taking place today.

When faced with a challenge, quantify it in the three akudim /nekudim/ verudim stages. Figure out which stage any given event or experience is up to. Is it at the budding, intense akudim stage, or at the scattered and fragmented nekudim stage, or ready for the networking verudim stage? This can help define the issue and the problem, which will allow you to find a solution.

How many more messages can we derive from these three stages? If you have any, please share them with me. Meanwhile, have a very good week. One that births many beautiful fruit…