Hope in the Abyss 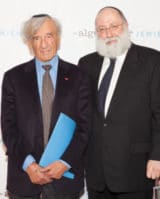 We would meet every few months in his book lined office on Madison Avenue. Despite him being almost twice my age, he would always greet me graciously at the door and lead me to the couch in his office where we would speak for hours on end.

Intimate would be the one word I would use to describe our encounters. With unusual warmth and concern he would discuss with me – primarily in his poetic Yiddish – world events, personal challenges, the trajectory of history – always infused with a sense of urgency and deliberate purpose.

Survivors of hell have an acute focus on the objective. They have little time for pettiness and wasting time. As Elie told me a number of times, “I cannot take my life for granted. My father, mother and sister died in the camps. Too many people died, and I could have been one of them. The fact that I am here is for a reason, and I never, ever forget that.”

But we also laughed together. He would often recall is longstanding and unique friendship with my father, Gershon. How they both were fledgling journalists working out of the UN in the late 50’s. How due to their meager means, they both would groom themselves in the washrooms at the UN, and take some extra tissues with them for later use.

Elie shared with me how in 1960, when he went off to publish his book Night, he asked my father to replace him as correspondent for the Israel daily, Yediot Ahronot. My father would remain in that position until 1972, when he founded the Algemeiner Journal.

There are so many fascinating details to share about the deep friendship that developed between Elie and my father. The time will come for that. But for now allow me to note a few lesser known, yet major milestones.

In one particularly moving conversation, Elie shared with me how he had basically given up on life after the war and the atrocities and losses he witnessed. Even after meeting French author François Mauriac, who persuaded him to serve as a witness and chronicle his experiences, he still felt dead inside and could not bring himself to personally commit to any life affirming activities.

In Wiesel’s own devastating words on his book, Night:

“Never shall I forget that night, the first night in camp, that turned my life into one long night seven times sealed.

Never shall I forget that smoke.

Never shall I forget the small faces of the children whose bodies I saw transformed into smoke under a silent sky.

Never shall I forget those flames that consumed my faith forever.

Never shall I forget the nocturnal silence that deprived me for all eternity of the desire to live.

Never shall I forget those moments that murdered my God and my soul and turned my dreams to ashes.

Never shall I forget those things, even were I condemned to live as long as God Himself.

But then things changed. Wiesel told me, “I credit your father as being one of the first people who altered my view and attitude to life. Though he had suffered himself under Soviet oppression, losing his parents at a young age, your father was a shining example of positivity and celebrating life and its possibilities.”

Elie paused, took a deep breath and continued: “And then in the mid 60’s your father introduced me to the Lubavitcher Rebbe. You father persuaded me to go see him, which I ultimately did. After hours of dialogue and subsequent correspondence, the Rebbe was the one who finally convinced me to marry and build a family. His most compelling argument – which I could not refute – was that the only and ultimate response to the “Final Solution” of the Nazi destruction was to build a family and perpetuate the memory of those they wished to obliterate.

“This changed my life, forever. In the single most important decision of my life I married Marion in 1969, and then in 1972 we had our son – our pride and joy – Shlomo Elisha, named after my father, who perished in Buchenwald.”

Clearly very emotional, Elie, walked me over to the photos on his desk. Pointing to pictures of his son and his grandchildren, he simply said: “Everything is worth this.”

Finally, after two decades of a night that seemed to never end, dawn broke.

Another thing that stood out in our conversations was Elie’s love for teaching. He would often say – especially when I would provoke him to respond to some recent controversy – “you know Reb Simon,” smile breaking out on his deeply lined face, “I am nothing but a simple melamed, a teacher. My love and my life work is teaching my students.“

Indeed, Elie leaves thousands of students who attended his classes first at New York’s City College, then at Boston University and Eckerd College, and most recently also at Chapman University. Many more came to listen to his memorable lectures at the 92nd Street Y in Manhattan.

No wonder then, that when my father died 11 years ago, the first person I called (outside of immediate family) was Elie. He immediately made his way from his home in Greenwich to the funeral in Brooklyn. Though our custom is not to eulogize, I asked Elie to share a few words, which he did – touching words from the heart of a friend bidding farewell to a friend.

And then during the shiva for my father, Elie was unequivocal in telling me: “The Algemeiner must go on. Your father’s legacy and my legacy – Elie was a regular columnist in the Algemeiner – will live on.”

True to his word, Elie threw his support behind the perpetuation of the Algemeiner, personally, financially and in every which way. He lent his name to chair our distinguished Tribute Committee.

And he told me not once: “I will help you in any way I can. I will never say no to you.” And again, true to his promise, he never said no. It is not an exaggeration to say that due to his support, presence and memorable lectures at our events the Alegemeiner exists and thrives today, as a powerful warrior for truth (in Elie’s words).

I once asked Elie is it true that marching into the gas chambers Jews would sing Ani Maamin, a heart stirring melody expressing one’s complete and unwavering faith in the coming of the Messiah who will usher in a new world order of peace. Elie replied, that the barracks where the Jews were held was a distance from the death chambers. But very often he did hear the whimpering prayers of the Jews near him. The cry of the Shema, the reciting of Kaddish, the Shabbat or holiday prayers, and also, the singing of Ani Maamin.

“If I may ask,” I continued, “how do you explain this devotion? In face of utter abandonment, of a God that was totally concealed, allowing His people, His children, to be decimated, the Jews had the total right to be angry at God. How do you explain the fact that instead they thanked God, they prayed to Him, they sang His praises, and declared their absolute belief that God will redeem them?!”

“Things really don’t make sense. Life is mostly absurd. We have seen man at his worst. But for the Jew insanity is not abnormal. I can’t tell you what was going on in the minds, hearts and souls of the Jews who walked to their deaths. But I can tell you that every single one of these sacred people knew one thing. And they declared it with their prayers and their songs:

My friend, the dear and beloved friend of my father, Gershon, you have made your mark. You have served as a child of your father’s and mother’s, and of so many fathers and mothers. You have brought into this world a son and grandchildren – and millions of students, considered to be children as well.

You have prevailed, as has the Jewish people.

We will live to see the world as promised to us.

And if not today, tomorrow.

It was an honor to know you. Please say hello to my father.

I tried to put in the comment column WOW but I got a response that my comment was too short. Allow me to repeat…WOW!

wow! how beautiful I have goose bumps what a beautiful love letter to a beloved friend