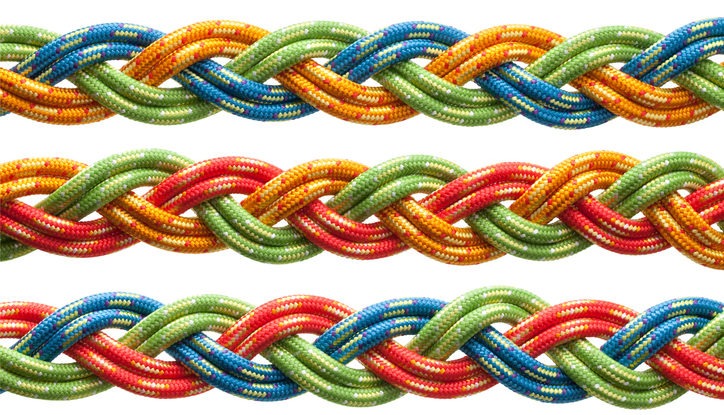 In the Third Month [when the Children of Israel left Egypt and arrived at Sinai to receive the Torah] a supernal and recondite light shines forth… and that light is contained in two lights, which are one. The first light [Chesed] is white, too bright for the eye to behold. The second light [Gevurah] is one which gleams and sparkles in red. The two are united and become one… Because it is contained in two lights, it is called the “Twins” (Ti’umim). Therefore, in the month in which the Torah was given (Sivan), the constellation of the “Twins” (Gemini) rules, and from them issue lights of various grades below to illumine the world.

Among all the other signs of the Zodiac there is not one possessing mouth or tongue, but this one has both, and the two are one. Therefore it is written in regard to the Torah: “And thou shalt meditate therein day and night” (Joshua 1:8), “day” corresponding to the tongue, and “night” corresponding to the mouth. And both these are one.

Therefore the word ti’umim (twins), ‘there were twins [Jacob and Esau] in her womb” (Genesis 25:24), is written t’umim [without the letter alef], in order to indicate that Jacob alone is under the sign of this constellation. This is all one mystery. Jacob had two months, Nissan and Iyar, and is included in the mystery of Sivan, Twins. Esau’s months are Tammuz and Av [when the Holy Temple was destroyed by the descendants of Esau], but Elul is not his, and even in Av only nine days are his not more. He separated himself and turned toward impurity, in chaos and desolation, and he is not included in the Twins.

And because Jacob is the Twins the Torah was given to his children in the month of the Twins. The Torah itself is a “twin”, the written and oral Torah; it was given in the third month (Sivan), symbolizing the treble Torah, Law, Prophets, Writings. And it is all one.

A cryptic Zohar indeed. Jacob is Esau’s twin. Jacob cannot be considered a twin without Esau. How then can the Zohar tell us that Esau is not included in the ‘twins’ of Sivan?

The twin brothers Esau and Jacob represent dual forces in our lives. In microcosm and macrocosm – both in our psyches and the larger universe – two conflicting forces drive us at all times. In general terms: the battle – and tension – between matter and spirit is an inherent part of every aspect of existence. This dichotomy manifests itself in so many ways: The conflict between career and home, between our personal higher standards and the pressure to conform to marketplace standards. The battle between our yearning for transcendence and the need for material survival, between existential loneliness and the sense of connection to a greater whole – the war between the outer and the inner, form and function, packaging and substance – between the pull from above and the tug from below. The list goes on.

Many philosophies and schools of thought have been espoused about this battling duality and ways to remedy or at least minimize the inherent tension between matter and spirit.

The Torah was given in the month of the ‘twins’ (Gemini) to teach us that these two forces are truly two sides of one coin – a set of twins that can either be at each other’s throat or unite into a synergetic force.

“The entire Torah was given in order to create peace in the world.” (Maimonides end of Laws of Chanukah)

In the Midrash ‘twins’ refers to the human experience of light and dark (Pesikta Rabsi 20). Or to the human duality of two forces, the good and evil inclination, that comes with process of maturity (Tanchuma Haazinu).

The giving of the Torah is all about creating unity in a world of duality – not by annihilating the duality, but by transforming it into ‘twins,’ two that are really one.

Esau is the warrior. On his own he can go either way: Either he can be an aggressive force representing material belligerence. Or he can channel his warrior nature to conquer the elements of the world and transform the material universe into a Divine home. Because in this mundane world we need intense strength to stand up to the challenges of life and not conform; we need a forceful attitude to “be fruitful and multiply and fill the world and conquer it.” (see the article Esau’s Two Faces).

Jacob (the soul) is the one that directs and channels the aggressive Esau (the body) into a healthy partner and ‘twin’ that joins forces with the soul to transform the universe.

The Zohar, therefore, tells us that when Esau ‘separated himself’ and indulged in material conquest, he essentially disqualified himself from being a part of the ‘twins’ as a unit in Rebecca’s womb. Technically, he remains Jacob’s twin, but conceptually he has allowed the apparent duality of the universe to control his life, hence, no true twins, only two separate forces at war with each other.

In truth, Sivan, the month of Twins, is actually the Third month, which corresponds to the third emotional sphere of Tiferet. Tiferet – beauty – creates harmony within diversity. Chesed (love) reigns in month one (Nissan), when the Divine revelation from above freed the people from constraints (Mitzrayim). Gevurah (diversity, discipline) is the energy of month two (Iyar), when our human initiative from below works on refining our 49 (7×7) emotions as we count the days of the Omer leading up to month three (Sivan), tiferet, which integrates chesed and gevurah, into one greater harmony.

Mattan Torah (the giving of the Torah) – which is called tiferet – united heaven and earth. As the Midrash explains that up to that point in history there was a schism that divided the ‘upper’ from the ‘lower;’ at Sinai we were given the power to marry the ‘upper’ and the ‘lower,’ spirit and matter. And the way we achieve this is through spiritualizing the material – fusing them both into a ‘twin-like’ relationship. It takes the special energy of the third dimension (tiferet) that transcends both body and soul, to ultimately integrate the two into one whole, without annihilating or compromising either one of them.

These twin forces have been consumed in raging battle from the beginning of time. Beginning in Rebecca’s womb “two nations” have been struggling, and:

“Two governments will separate from inside you. The upper hand will go from one to the other.” (Genesis 25:23)

As history unfolded these two forces – which began as two individuals in Esau and Jacob – magnified and multiplied into global confrontations. Before Sinai (the children of) Esau is offered the Torah, but he rejects it; he has separated himself and is not yet ready to be a true ‘twin.’ (see article Esau, Ishmael and Sinai)

As the centuries rolled on, Esau’s children (the Romans) would destroy the Temple, and years later they would begin to embrace in their own way some of the Torah’s message.

Two millennia later much has transpired. The world of Esau has evolved and continues to refine itself, aligning itself more and more with the teachings that the original Esau learned from his father Isaac and grandfather Abraham.

The universe as well has evolved to a point where matter and spirit have become interchangeable (e=MC2), and they continue to evolve to the point where we can now see that they soon may be synonymous, or better put – ‘twins.’ In physics, technology, communications, medicine, we are witnessing the convergence of a duality that has always been the staple of the universe.

Yes, the twins Esau and Jacob are about to finally meet and join hands. Thousands of years ago Jacob told Esau (even after they reconciled):

“…that the children are weak and I have responsibility for the nursing sheep and cattle. If they are driven hard for even one day, they will die…Please go ahead of me… I will lead my group slowly, following the pace of the work ahead of me, and the pace of the children. I will eventually come to you, my lord, in Seir [Edom].” (Genesis 33:12-13)

The time had not yet come for the ‘twins’ to unite.

“And when will he [Jacob] go [to Seir]? In the days of Moshiach, as it says (Ovadiah 1:21) Redeemers will ascend Mount Zion to judge the Mount of Esau, and the kingdom will be G-d’s.” (Rashi ad loc)

After over three millennia they are finally ready to unite.

We now have the power to finally bring some peace to our fragmented (if not tortured) spirits, and by extension, to our ailing world.

Two twins have been wandering for so long, isn’t it time to finally come home?

thank you. i really enjoyed reading this piece and gained many new insights.