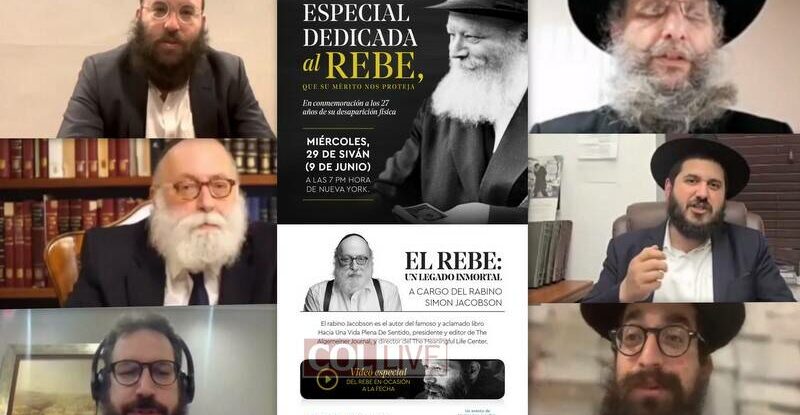 In honor of Gimmel Tammuz, a virtual event was held, bringing together Jewish communities from across the Spanish-speaking world.

Rabbi Simon Jacobson, author of the best-selling book Toward a Meaningful Life and dean of the Meaningful Life Center, was the guest speaker. He inspired the virtual crowd with themes about the uniqueness of the day and the eternal legacy of the Rebbe. Mr. Roni Litmanovic of Panama enabled a seamless engagement through simultaneous translation.

The MC of the night was Mr. David Fridzon from Caracas, Venezuela. Leading everyone in the recitation of the Rebbe’s Kapital was Rabbi Shneur Zalman Blumenfield of Peru. Rabbi Mendel Shemtov of Uruguay urged the crowd to take upon themselves resolutions in honor of the day, particularly the Rebbe’s institution of the study of Rambam. The completion of the 40th cycle was also being marked that night.

In addition, Rabbi Mendy Kotlarsky, director of Merkos 302, encouraged all the participants to become ambassadors to their own families and communities, spreading the light of Torah and Mitzvos.

A specially produced video by JEM was played, illustrating how every person has a unique contribution to making this world a better place.

One participant from Peru described the event as “energizing.” “I watched the whole event from beginning to end. It was spectacular, well organized, and I gained a lot of energy from it.” Another added, “The Rebbe’s wonderful teachings and incredible greatness left a major impact on me. Thank you for what Chabad does for every Jew.”

The event was organized by Rabbi Chai Kohan, Director of Merkos 302 Spanish Department.