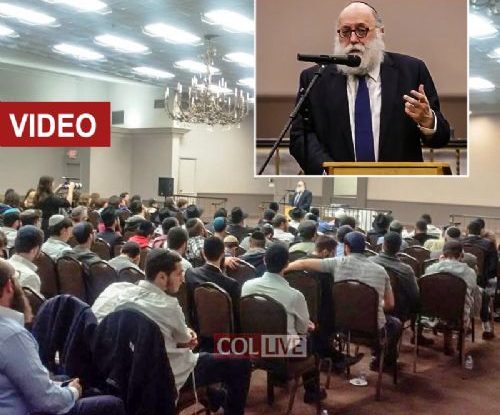 Over 250 people attended the inaugural lecture of the Anash Lecture Series this past Thursday night in Los Angeles, CA.

The event headliner, Rabbi Simon Jacobson, regaled the audience in his usual erudite style, discussing the much important topic of how to deal with apathy towards yiddishkeit in a talk titled “I’m just not feeling it!”

“Just when I thought everyone that was coming was there, the people just kept on piling in,” said Sruli Schochet, one of the event organizers. “We ended up have an overflow crowd spilling into the entrance foyer.”

Rabbi Jacobson, author of the bestselling book “Towards a Meaningful Life,” kept the audience captivated for well over an hour, punctuating his talk with anecdotes and humor.

In the days after the lecture, Rabbi Jacobson received such positive feedback, that he filmed a 7-minute addendum to the talk with some short, practical take away points and exercises that everyone can benefit from.

“My students listen to Rabbi Jacobson’s shiurim on-line, so I jumped at the opportunity for them to hear him live,” said Rabbi Mendy Seewald, Judaic Principal at Jewish Educational Trade School (JETS). “The boys told me, as much as they like him on video, in person he was amazing!”

“This just highlights the importance of making the admission to these lectures free of charge,” said Schochet. “Schools are notoriously cash strapped. Had they needed to pay a few hundred dollars just to get in, they never would have been able to come.”