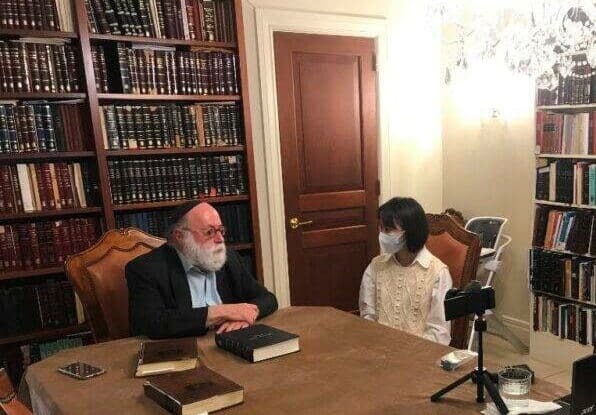 Monthon Kasantikul, the world traveler who visited more than 50 countries and has a following of millions on YouTube, Facebook and Instagram, is filming a series about Chassidic Jewish life in New York for her channel “I Roam Alone.”

Kasantikul, also known on social media as “Mint,” reached out to Shloime Zionce of Ami Magazine and expressed interest in learning about the Chassidic tradition. Together, they visited Jewish communities in Brooklyn and beyond.

She first went to Boro Park on May 20 and visited Mendelsohn’s Pizza for lunch and Eichler’s Judaica where she learned about Jewish books and holy items. At Fino clothing, she learned about Chassidishe Levush (garb) that Chassidim have brought with them from Eastern Europe and proudly wear on a daily basis.

Later in the day, she visited the Crown Heights neighborhood where she sat for a long conversation with Rabbi Simon Jacobson, the Chassidic thinker and author of “Towards a Meaningful Life.” For kosher dinner, she went to Izzy’s BBQ and then stopped at Prestige Embroidery where Mrs. Esty Borenstein showed beautiful Tallis and Tefillin bags, and Torah mantels.

On May 31, she traveled to the Five Towns on Long Island to the home of Mrs. Sarah Dukes in Cedarhurst. Dukes, an award-winning composer, explained the concept of “Bayis Malei Seforim” (a home filled with holy Jewish books) and explained the intricate details of a Kosher kitchen. As she played one of her soulful musical compositions, Dukes spoke about her late husband Rabbi Yudi Dukes OBM, founder of the Jnet Torah learning organization who passed away at the age of 39.

Mint later had lunch at “Upper Crust” and visited Aron’s Kissena Farms in Queens where she learned about Kosher food and sampled Kosher products.

For additional footage, Mint returned to Crown Heights on June 1 where she filmed at Lubavitch World Headquarters – 770 Eastern Parkway. Rabbi Chaim Baruch Halberstam showed her the WLCC broadcasting room of the Rebbe’s farbrengens. While there, Rabbi Yosef Chaim Kantor, Head Shliach and Chief Rabbi of Thailand, stopped by. Mint was very pleasantly surprised to meet a rabbi from her hometown of Bangkok.

She later filmed at the Jewish Children’s Museum and then to Merkos 302 office where its director Rabbi Mendy Kotlarsky detailed the growing operations that cater to kids, teens, young professionals and more. She later had lunch at Beouf & Bun on Kingston Avenue.

In Pomona, she met with Chassidic singer Lipa Schmeltzer who talked to her about his music and the art her personally creates.

The first videos are expected to be released within the next few weeks, COLlive.com was told.