While passing through a marketplace, Rabbi Kehot of Veritch, a disciple of Rabbi Israel Baal Shem Tov, overheard a conversation between two horse dealers.

“I was thinking,” said one to the other. “What does the psalmist mean when he says, ‘Do not be as a horse, or a mule, without understanding, their mouths stopped with bit and bridle’[1]? Well, when you put a bit in a horse’s mouth, he thinks that you are giving him something to practice his chewing on. Don’t be like a horse, King David is saying. When your Heavenly Master sends something your way, understand that it is more than something to chew on…” 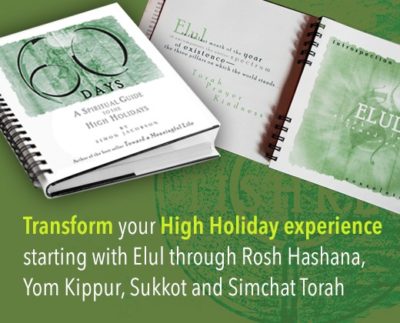 Rabbi Kehot related this exchange to his teacher. The Baal Shem Tov was greatly excited by the horsedealer’s insight, and was inspired to a state of d’veikut (meditative attachment to G-d). In his ecstasy, the Baal Shem Tov began to sing a melody. This is the melody to which the rebbes of Chabad would pray on the first night of Rosh Hashanah.

With the approach of Rosh Hashanah as we close the past year and welcome the new, what better time for auditing our experiences in the past year so that we can better them in the year to come. Each one of us does so in our own personal way. Yet, there is something we can all learn from Moshe the innkeeper who employed a unique method of accounting.

The Baal Shem Tov’s students once asked how to prepare for the High Holidays. He sent them to observe the simple innkeeper, Moshe. The students took a room in his inn, and waited to discover the answer to their question. At midnight before Rosh Hashanah they heard Moshe rustling about in the front room. They peeked out and saw Moshe taking down two large notebooks from the shelf. He sat down on a small stool, lit a candle, and began reading from one notebook.

The notebook was a diary of all the misdeeds and transgressions the innkeeper had committed in the course of the year – the date, time and circumstance of each scrupulously noted. His “sins” were quite benign — a word of gossip one day, oversleeping the time for prayer on another, neglecting to give his daily coin to charity on a third — but by the time Moshe had read through the first few pages, his face was bathed in tears. For more than an hour Moshe read and wept, until the last page had been turned.

He then opened up the second notebook. This, too, was a diary — of all the troubles and misfortunes that had befallen him in the course of the year. On this day Moshe was beaten by a gang of peasants, on that day his child fell ill; once, in the dead of winter, the family had frozen for several nights for lack of firewood; another time their cow had died, and there was no milk until enough pennies had been saved to buy another.

When he had finished reading the second notebook, the tavernkeeper lifted his eyes heavenward and said:

“So you see, dear Father in Heaven, I have sinned against You. Last year I repented and promised to fulfill Your commandments, but I repeatedly succumbed to my evil inclination. But last year I also prayed and begged You for a year of health and prosperity, and I trusted in You that it would indeed be this way.

One year, when the first day of Rosh Hashanah occurred on Shabbat, Rabbi Levi Yitzchak of Berdichev ascended the podium in the center of his synagogue and addressed the heavens:

“But today is Shabbat. Did You not command in Your holy Torah that is forbidden to write on Shabbat? True, it is permitted to violate Shabbat in order to preserve a life, so You are permitted to inscribe the righteous in the book of life. But no such clause permits inscribing those who have transgressed Your will in the book of death. I therefore inform You, dear Father in Heaven, that according to the law of the Torah, You must inscribe all Your children for a year of life, health and prosperity!”

HaMelech (“the King”) is an oft-occurring word in the Rosh Hashanah prayers, whose dominant theme is our coronation of G-d as king of the universe and submission to His sovereignty. Indeed, this is the first word chanted by the cantor on Rosh Hashanah morning, as he opens the Shacharit prayers with an awe-inspiring melody that climaxes with a sonorous Ha-Me-lech!

One Rosh Hashanah morning, the great Chassidic master Rabbi Aaron of Karlin fainted when he came to the word HaMelech. He later explained that he recalled the Talmudic passage[1] that describes Rabbi Yochanan ben Zakkai’s encounter with Vespasian. Rabbi Yochanan had himself smuggled out of the besieged city of Jerusalem to plead with the Roman general to spare the Torah center of Yavneh. When Rabbi Yochanan entered Vespasian’s tent, he addressed him as “Your Majesty.”

“You are deserving of death on two accounts,” said Vespasian. “First of all, I am not  the king, only His Majesty’s general.[2] Secondly, if I am indeed king, why did you not come to me until now?”

“I thought to myself,” said the Rebbe of Karlin, “if we address the Almighty as ‘King,’ does this not invite the question, ‘If I am indeed your king, why did you not come to me until now?’ What can we answer to that?”

[2]. Immediately afterward, relates the Talmud, a messenger arrived with the news that the emperor had died and Vespasian had been appointed to succeed him

wonderfull, inspiring stories, also a great resource for classes!
if possible, id love to see the sources for stories of the rabbeim!

To understand King Davids comment about the bite and a horses oral behaviour is to see it as a part of a metaphore for how we can strive to welcome acceptance of G-ds many gifts to us.
Horses who chew on a bit do so because a bit results in oral stimulation. In fact, a bit will stimulate your oral behviour in a similar way.
Love your horse at Rosh Hashanah because they put up with crude human control measures like a bit and bridle which forces horses into responses to human people through habituation as a education of the aids in which we communicate to them. Please observe how a horse reads our body language as a direct and clear communication: how truthful is this; far more than when people speak to a horse to act out our desires.
I wonder if we are as accepting as horses are of us, as we are of G-ds gifts; in reality. Love and observe the wellbeing animals and people give to us all: G-d speaks to us through many faces and some of those are not human, but animal faces.
Cheers, Alice Cohen 🙂