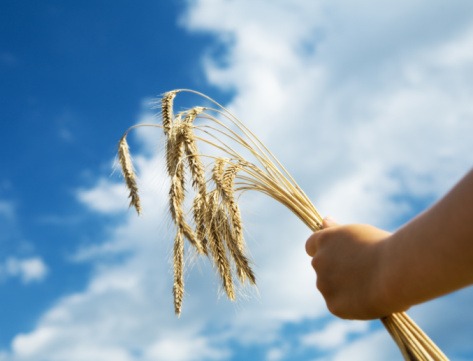 And G-d said to Moses: “I shall rain down to you bread from the heavens. And the people shall go out and gather their daily portion…”

And the children of Israel did so: they gathered [manna], some more, some less. [Yet] each measured an omer [of manna]—he who gathered more had no more, and he who gathered less had no less…

“Life” is the general term we use to refer to the litany of actions—elementary and complex, subtle and pronounced—that the soul stimulates in the body. The body, on its own, is as static as “flesh and bones sitting in a pot” 1 the soul infuses it with warmth, vitality and awareness, imparts to it the capacity for self-perpetuation (growth and reproduction), instills in it a will, and grants a mind to its brain, sight to its eyes and brawn to its muscles. All this and more is “life,” the most analyzed and least understood phenomenon in existence.

More specifically, the influence of the soul upon the body falls into two general categories: “elementary life” and “particular life.” 2 “Elementary life” are the qualities common to all living bodies and all parts of a living body. In terms of “elementary life,” the infant is no less or more “alive” than the adult, and the brain is no more or less “alive” than the foot. “Particular life” are the vital influences of the soul that are specific to a particular body and a particular organ. Thus, the soul imparts sight to the eye and intelligence to the brain. It grants a higher degree of sensitivity to the fingertip than to the heel. And it differentiates between individuals: in their mental prowess, depth of feeling, eyesight and weightlifting capacity.

What is true of physical life is also the case regarding the life of the spirit: the vitality of the soul also consists of an “elementary life” and a “particular life.” The “elementary life” of a soul are the qualities common to every soul and fundamental to every area of spiritual life, such as the intrinsic faith and commitment to G-d that every soul possesses in equal measure and which permeates all its “organs” and “limbs.” 3 A soul’s “particular life” are the faculties, talents and sensibilities that comprise its individual spiritual persona (its understanding of G-d, its feelings toward Him, its spiritual experiences and deeds, etc.).

A Morsel for a Giant

Food is the glue of life, the medium that holds body and soul together. So food, too, has both an “elementary” and a “particular” role in the sustenance of life.

On the particular level, each body has its specific nutritive needs, as dictated by age, body size and physiological constitution. In the same body, each organ and cell requires its own “diet” of vitamins and nutrients for its maintenance and development. But there is also an “elementary” function to food, one that embraces all bodies and organs equally. Food sustains life in the most basic sense of the word—life as the vital energy that vivifies the flesh. In this, food affects every body and every part thereof in the same way.

An expression of the relationship of food with “elementary life” can be found in the Talmud’s discussion of the laws of Yom Kippur. The Torah forbids the consumption of food on Yom Kippur. The quantity of food that constitutes a violation of this prohibition 4 is the volume of a kotevet (fresh fig). The Talmud then adds that this law applies equally to everyone, regardless of body size, since food in the amount of a kotevet stills the hunger of every individual, be it a small child or “Og the King of Bashan” (a famous giant). 5 In other words, there is an elementary function to food which relates equally to every body, without regard to its particular size or qualities.

In the sixteenth chapter of Exodus we read of the manna, the “bread from heaven,” that sustained the children of Israel during their forty-year journey from Egypt to the Holy Land.

A much emphasized detail in the Torah’s account is the quantity of manna allotted to each individual. G-d commanded to “gather it, every man according to his eating needs: an omer per head.” 6Each night, the manna would fall from the sky, and each morning, the head of the household was to gather an omer for each member of his household. It was strictly forbidden to save part of one day’s portion for the next (except on Friday, when a double portion was to be collected, as the manna did not fall on Shabbat). If a person gathered more than an omer, he nevertheless found exactly one omer in his basket; if a person gathered less than an omer, he, too, found a full omer in his basket.

This seems to contradict everything we know about food: that an adult eats more than a child, that a man eats more than a woman, that a larger body requires more than a smaller one. It is true that the manna was a miracle food, but the fact that G-d stipulated a specific quantity as a person’s daily portion implies that the manna was to operate as a physical food, whose mass provides the calories to fuel life. Indeed, the above-quoted verse (“Gather it, every man according to his eating needs: an omer per head”) emphasizes that the manna was to be allotted not by some esoteric criteria, but by a person’s need. 7 Yet in the same sentence it determines this need to be a uniform omer per head! In other words, the manna emphasized the role of food in sustaining the “elementary life” of man, distinguished by its uniform nature, over the individual-specific nourishment of “particular life.”

The manna came to nourish the children of Israel in their first forty years of nationhood. In this critical period, the emphasis was on nurturing their “elementary life”—the very essence of their bond to G-d. This is comparable to the very first days of infancy, when the care of the infant focuses primarily on the effort to feed and sustain him, rather than the development of his particular faculties and talents. 8 So the dominant quality of the manna was its function as the nurturer of “elementary life,” also expressed on the physical level by the uniform quantity allotted to every individual, regardless of his or her particular qualities.

Indeed, the Torah does not even tell us, at first, how much an omer is. This it does only at the very conclusion of its account, in discussing the period of transition when the people of Israel concluded their generation-long journey from Egypt to Canaan and entered the Promised Land. The manna had already ceased to fall, but a supply of it lasted until they could harvest their first crop of grain in their new homeland. 9 Only then does the Torah tell us that “An omer is a tenth of an eifah”—i.e., the volume of 43.2 eggs. 10

For it was only when the people of Israel crossed the Jordan River to begin their life as a people living off the land that their omer of manna became a defined quantity—a quantity that can be measured, divided, meted out, adjusted to the particulars of a personal diet. They had now matured to the point where the “elementary life” aspect of their development receded to the background and the cultivation of their “particular life” commenced. Their intrinsic bond with G-d was now to be translated into the particulars of a life devoted to the sanctification of a material existence.