If a mapolet (collapsed building) falls on someone [on Shabbat], even if it is doubtful whether he is there or he isn’t there, whether he is alive or dead, whether he is a Jew or a heathen, one must clear the rubble-heap from him.

The Torah is likened to the human being.[1] Like man, Torah is a synthesis of body and soul, possessing a “physical” element–a legal code and guide to physical life–as well as a “spiritual,” mystical element that addresses the inner life of the soul. And just as the human body and soul combine and integrate to form the entity “man,” so it is with the body and soul of Torah: on the one hand, its most sublime concepts have their practical applications in day-to-day life; on the other hand, every limb and cell of Torah’s “body” also holds a spiritual import, relating to the human psyche, man’s relationship with his Creator, and the purpose of his existence. The same is true of the above-quoted passage from the Talmud. On the surface, this is part of the “body” of Torah–a law that spells out the extent to which one is permitted (and obligated) to violate the Shabbat in the case that there is even the slightest chance of saving a life. On a deeper level, the principles established by this law extend beyond the specific case of a building that collapsed upon its inhabitants on Shabbat to illuminate our struggle to find order and meaning amidst the hazards of life.

A collapsed building, it can be argued, is essentially no different from a standing one. Its mass and weight have not changed, nor has the composition of its materials: every brick and beam, every nail and window pane, every piece of furniture and every utensil is still there. All that has changed is their external form and their arrangement vis-à-vis each other. But what a difference! On the one hand we have a home: an edifice containing an array of rooms, each designed and equipped to serve a vital need of its inhabitants, which together shelter and facilitate the complex and multifaceted life of a family. On the other hand, we have a pile of rubble that poses a mortal danger–or, at the very least, makes life fairly miserable–for anyone unfortunate enough to be caught inside.

The world is a complex structure whose design and purposefulness is evident to any unbiased observer. [2] But man has free choice: he can choose to ignore the obvious and view the world as a haphazard pile of rubble–a mishmash of elements, creatures and “laws” without origin, direction or purpose. Such a person is comparable to one who has been buried by a mapolet–one who inhabits creation not as a resident of the home that it is, but as one overwhelmed by a meaningless, capricious, soul-crushing mound of debris.[3]

“Do not stand by the blood of your brother,”[4] warns the Torah. You cannot envelop yourself in a personal Shabbat-sanctity, aloof from a chaotic world. Rather, you must labor to clear the rubble-heap from your fellow man, enlightening[5] him by teaching and example. When another’s spiritual life is in jeopardy, you must disrupt your own “Shabbat” to save him.

As we said, not only does every law of the “body” of Torah have its spiritual counterpart, but also its every article and clause. Thus, each of the details put forth by the Talmud–the possible doubts that may exist (there or not there, alive or dead, Jew or heathen), how far to check for signs of life (heart or nose), and the matter of how deeply buried in the rubble the victim is (the “higher ones” and the “lower ones”)–all apply to the “soul” of this law.

Generally speaking, there are three questions that can be asked concerning one who is buried in the “rubble” of a materialistic perception of reality:

a)      Is he there? Often a soul might be overwhelmed by the entanglements of physical life, but he is not truly “there.” His heart is with his spiritual self, and “the place where a person’s thoughts lie, that is where he truly is.”[6] His involvement with the material is listless and dispassionate–he senses that this is not his place and yearns for a more spiritual life. Such an individual is obviously the easiest to extract from the rubble-heap–indeed, he might not even require our assistance at all. On the other hand, a person might be so enmeshed in the rubble heap that he–his thoughts, feeling and desires–is indeed there, buried in materiality.[7]

b)      Is he alive? Life, in its ultimate definition, is attachment to the Creator and Provider of life; in the words of the Torah, “You who cleave to G-d … are alive.”[8] Those, however, who violate the divine will, turning their backs on the source of their own vitality, “are referred to as ‘dead’ even in their lifetimes.”[9] A person might be enveloped in the “rubble-heap” of materiality but still be alive, animated by his fulfillment of Torah and mitzvot; or he might have severed, G-d forbid, the lifeline of his soul.[10]

c)      Jew or alien? Even one who transgresses the divine will might still cling to his identity, harboring a loyalty to his G-d and people however belied by his behavior and outlook. But what of the one who is so overwhelmed by the “rubble-heap” that he is completely alienated from his roots and has renounced the very essence of who and what he is? Is there any point in disturbing one’s own spiritual tranquility to attempt the excavation of such an individual?

Says the Torah: whatever your doubts about your buried brother–whether he is “there” or “not there,” “alive” or spiritually “dead,” or even completely alienated–he is never beyond hope. You must do everything in your power to clear the rubble that smothers his soul, revive him, and rekindle his indestructible identity.

No soul is beyond hope, for the soul is “literally a part of G-d above.”[11]G-d may have forged the human body from “the dust of the earth,”[12]making man susceptible to the earthliness of his environment; but “He breathed into his nostrils a living soul,”[13] imbuing dust with spirit and imparting to clay a spark of divinity.

Man might suppress the divine essence within himself, banishing it to the deepest recesses of his heart–reducing it to a faint glimmer of conscience that flares on occasion but does not “interfere” too much with the daily business of life. Or, he might banish it altogether from his internal self, so that it has no perceptible influence upon him at all. But he cannot undo what G-d has done. G-d breathed a living soul into his nostrils; man can deny it entry into his being, but there it hovers, poised at the portal of his life. Thus, such an individual is referred to as one whose “soul is in his nose”[14]–residing in the entranceway of the body from which it has been exiled, ready to pervade his mind, heart and life the moment he inhales the divine breath of life imparted to him.

Therein lies the deeper significance of two opinions cited by the Talmud as to how far to search for signs of life when excavating a body from the rubble of a collapsed building on Shabbat. One opinion holds that if no sign of life is found in the heart, there is no point in digging any further. Spiritually, this means that even if a person’s behavior in no way reflects the G-dliness of his soul, there is still hope to revive him, as long as some trace remains in his heart, if only in the form of a faint memory, a twinge of conscience, a flicker of sympathy. But if even this is absent, there is indeed nothing to be done.

Another opinion, however–and so goes the halachic ruling[15]–is that even if the heart exhibits no sign of vitality, one must keep on digging. For even if there is life only in a person’s “nose,” his divine potential can still be revived and ultimately be made to vitalize his entire being.

If you see that great and lofty men have succumbed to the mapolet, do not presume that those with a lesser degree of talent, intelligence and spiritual aptitude are doomed. On the contrary: time and again we have seen that it has been the simple folk who persevered, while their more eminent and erudite brethren have fallen by the wayside.

The simple Jew, his faith and integrity uncolored by the pretensions of intellect, is the hardiest survivor of them all.

[2] The analogy of creation as a “building” is reflected in the Kabbalistic equation of letters with “stones” (e.g., Sefer Yetzirah, 4:12: “Two stones (letters) make two houses (words), three stones make six houses, four stones make twenty-four houses….”). The world was created with Ten Divine Utterances (e.g., “Let there be light,” “Let the earth give forth vegetation”), and the essence of every created thing is the divine letters that continually provide it with being and life (Ethics of the Fathers 5:1; Tanya, part II, ch. 1). Thus, every element and phenomenon is a “stone” in the edifice of creation.

[3]. In a certain sense, we are all caught in a cosmic “rubble-heap.” Our sages tell us that, originally, the world was punctiliously compartmentalized: the positive and the negative, the spiritual and the mundane, each occupied its distinct place and role, with no contact or overlap between realms. Adam’s sin, however, spelled the collapse of this structure, blurring the delineation of good and evil and plunging man into a mundane world in which “sparks of holiness” are haphazardly embedded. Our mission in life is to extricate ourselves from the morass and restore the primordial order of G-d’s creation (Likkutei Torah LehaArizal, Bereishit and Beshalach; Tanya, Iggeret HaKodesh, section 12; Torah Ohr, Bereishit 5c-6a, 15d and 21b).

[5]. The Hebrew verb mefakchim, “one must clear,” employed by the Talmud in the sentence, “One must clear the rubble-heap from him,” also means “one must enlighten.”

[7]. Often, the “spiritual” interpretation of a law explains certain difficulties or abstrusities that might arise in a purely “physical” reading. A case in point is our mishnah, which begins with the clause “If a mapolet  falls on someone” and then goes on to speak of a doubt whether “he is there or he isn’t there.” This seems a contradiction in terms, unless we say that the doubt is whether the person might have crawled out of the debris on his own, without our knowledge. On the spiritual level, however, we arespeaking of the case of one who is buried by the mapolet (i.e., submerged in a material existence) but is nevertheless “not there” (his heart is not in it). 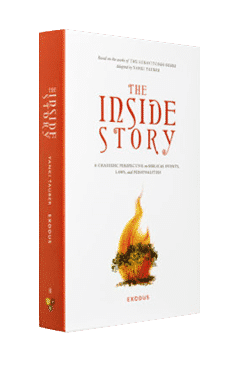 The Inside Story Volume II - Exodus

A journey into the Torah's inner meaning.

Sixty-two insights from the book of Exodus to illuminate the big questions of life as well as its most rudimentary concerns.

How Much Power Do We Have to Refine the Atmosphere Around Us?

What the Stars Say About YOU: Aquarius