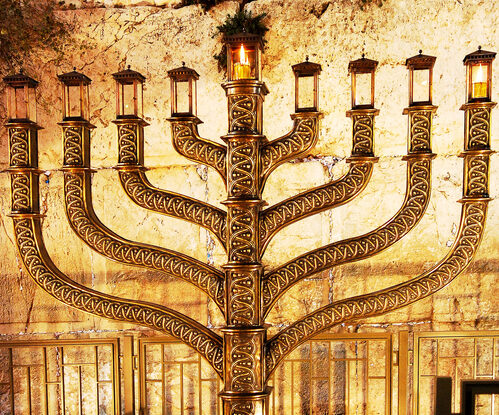 And G-d spoke to Moses, saying: … When you raise up the lamps, the seven lamps should give light toward the face of the menorah… And this is the work of the menorah: it was of beaten gold, from its base to its flower it was beaten work…

On three different occasions, G-d instructed Moses on the making and the kindling of the menorah (candelabrum) in the Holy Temple. In the 25th chapter of Exodus, a detailed description of the menorah is given as part of G-d’s instructions on the construction of the Sanctuary. In Leviticus 24, G-d commands Moses regarding its daily lighting.[1] Finally, we have the above-quoted verses from Numbers 8, which open the Torah section of Beha’alotecha.

The Beha’alotecha verses specify two laws of the menorah:

a) That all of its lamps should be turned toward its center stem (“the face of the menorah”),

b) That the Holy Temple menorah should not be made piecemeal and its parts welded together; rather, the entire candelabrum—its base, its center stem, its six arms and its decorative forms (22 goblets, eleven globes and nine flowers), standing seventeen tefachim high (about 60 inches) and weighing a full kikar (approximately 150 pounds)—should be hammered out of a single block of gold.

Both these laws were already stated in the earlier passages detailing the menorah. Their repetition here emphasizes their centrality to the function and significance of menorah.

“The soul of man is a lamp of G-d.”[2] Like the lamp, the function of the soul is to illuminate its surroundings. The soul, “literally a part of G-d Above,”[3] is placed within a material body and world so that it should radiate its light to the darkest reaches of the created reality.

The candelabrum in the Holy Temple had seven lamps, corresponding to the seven primary traits of the human character. Some souls excel in the trait of chessed (love, benevolence), others in the attribute of gevurah (self-discipline, fear of G-d); still others exemplify tiferet (harmony, compassion), netzach (ambition), hod (humility, devotion), yesod (communicativity, connectedness) or malchut (regality, receptiveness). Together we form a seven-branched menorah, radiating seven qualities of light which fill the Temple of G-d and spill out to the world beyond its walls.[4]

This is the deeper significance of the two laws reiterated in the Beha’alotecha verses. The second law emphasizes the singular origin of the diverse community of man. The entire menorah must be hammered out of a single piece of gold, for all seven types of soul derive from a single source. All are equally “literally a part of G-d Above,” in origin and in essence one.

The first law expresses the common objective of the menorah’s lights. All lamps are turned toward “the face of the menorah.” Even after they have branched off into seven distinct lamps, even after they are burning with seven different lights, all are directed toward the same place. All are striving toward the same goal, notwithstanding the differences in the nature and orientation of their quest.

Rashi refers to these verses as Parashat HaMenorah, i.e., “The Menorah Section.” Nachmanides, on the other hand, sees their primary purpose as instructions on how to light the lamps. In other words, according to Rashi, the raison d’etre of these verses is to reiterate the second law—that the menorah be “hammered work”—a law pertaining to the construction and form of the menorah itself. According to Nachmanides, their main purpose is to relate the first law, which relates to the manner in which the menorah’s lamps should be lit.

The menorah describes the community of souls as originating as a singular entity, which then branches off into seven lamps that are different and distinct yet are all pointed toward a common goal. This general picture can be viewed from two perspectives. One can place the emphasis on the common origin, and see the common focus of the seven lamps as an expression of their intrinsic singularity. Or, one can emphasize the fact that this single menorah has produced seven lamps which, even as they strive toward their common goal, do so each in its own way, each with its own unique and distinct personality.

This is the underlying significance of the difference between Rashi and Nachmanides. Rashi sees life as an exercise in oneness. The diversity of human nature is but a superficial illusion; you need but scratch its surface to find that we’re all basically doing the same thing. This is the message of the menorah: I have a base and I have flowers; I have seven branches; but I am of a single piece.

Nachmanides, on the other hand, sees intrinsic worth and significance in the diversity of human nature. Our differences are not just means to the common end, but central to life’s purpose. Yes, we all derive from one place; yes, we are all striving toward the same goal; but the different ways in which we travel this course are what make the menorah of life, and are themselves of enduring luminary value.