A Lesson in Humility

Be humble before every man.

Let’s be realistic. Is there no one out there who is less intelligent, less accomplished or less virtuous than yourself? Okay, discount the half-dozen degrees by which your ego inflates your self-perception. Still, is there no one on earth who is less worthy than you? So what does it mean to “be humble before every man”? Is the mishnah telling us that it is our moral duty to underrate ourselves? To do so would be a sinful waste of our G-d-given talents, which can never be optimally realized unless we are aware and appreciative of what we have been given and what we have accomplished. In the words of Rabbi Yosef Yitzchak of Lubavitch: “Just as it is imperative that a person recognize his own shortcomings, it is no less crucial that he recognize his advantages and strengths.”

How, then, does a person make a true evaluation of himself, for the worse and for the better, and at the same time experience a genuine feeling of humility before every other individual?

Chassidic teaching offers two approaches to develop a true feeling of humility toward someone whose character or behavior is obviously inferior to one’s own: a) the “mutual dependency” approach and b) the “relative expectation” approach.

The humble man looks at the larger picture rather than the particulars, at the unified purpose of life on earth rather than only at his function within this purpose. No matter how lofty his own role may seem in relation to his fellow’s, he is grossly limited without him. The knowledge that his own life’s work is incomplete without his fellow’s contribution arouse feelings of humility and indebtedness toward his fellow: he recognizes that even the coarsest “limb” of the mutual body fulfills a deficiency in himself.[1]

In this approach, humility is not equated with a sense of inferiority. Rather, it stems from a feeling of equality and mutual need. In becoming humble, a person first realizes that any greater measure of intelligence, refinement, spiritual sensitivity, etc., that he may divine in himself in relation to his fellow is nothing to feel superior about: these are only the tools that have been granted him for his individual role. He also recognizes the limitations of his own accomplishments, and the manner in which they are fulfilled and perfected by the communal body’s other organs and limbs. So he is humbled by the ability of his inferior fellow to extend and apply their shared mission on earth to areas that lie beyond his individual reach.

The second approach, however, defines “humility” in the more commonplace sense—as a feeling of inferiority in relation to one’s fellow. How is this truly and truthfully achieved in relation to every man? By conducting a thorough evaluation and critique of his own moral and spiritual standing. In doing so, one is certain to find areas where he has failed to prove equal to what is expected of him. That his fellow may be guilty of the same or worse is irrelevant: concerning his fellow’s behavior he is in no position to judge. “Do not judge your fellow until you are in his place”[2] say our sages, for you have no way of knowing how his nature, his background and the circumstances surrounding any given deed may have influenced his behavior. However, regarding your own behavior you are “in his (i.e., your own) place” and in a position to know that, despite all the excuses and justifications you may have, you could have done better. With such an approach, a person will “be humble before every man” in the most literal sense of the term, perceiving his every fellow as superior to himself.[3]

Which approach to take? On the whole, the Torah tells us to accentuate the positive in ourselves. True, soul-searching and self-critique are important, for a person must never delude himself. However, excessive dwelling on one’s shortcomings and failures leads to a down-spiraling vortex of depression, despair and inertia, resulting in the very opposite of constructive action. So, generally speaking, the precept “Be humble before every man” should be employed in the first manner outlined above: not by disparaging oneself in relation to another person, but by recognizing the indispensability of each of one’s fellows to the completeness of one’s own attainments.

But there is also a time and place for the second approach. The soul of man is a “spark of G-dliness,” inherently and utterly good; yet man must also contend with the egocentric drives of his “animal soul.” Physical life is basically the struggle between these two selves, between the divine-seeking G-dly self and the material-seeking mundane self.[4]

In the course of this struggle, a person may encounter a lack in his character that proves especially resistant to all his efforts. He may find this negative trait reinforced by a sense that “this is the way it is, there is nothing to be done”—a “humility” and a self-depreciating despair that actually stem from the ego-driven arrogance of his animal self. In such a case, one must “fight fire with fire” and administer a dose of its own medicine to his animal soul. He must humble himself by contemplating the lowliness of his animal nature, and that his compliance with its drives and arguments renders him inferior to even the lowliest of men.[5]

This is the constructive side of the second approach to humility, as a sense of inferiority. For at times, this is the only way for a person to break the arrogant “humility” of his animal self and proceed with the lifelong quest for self-refinement.

[1] As one wise man put it, “The test of humility is in your attitude to subordinates” (Orchot Tzaddikim, Sefer Ha-Middot, 15c, ch. 2).

[3]  “A sage said: ‘I never met a man in whom I failed to recognize something superior to myself: if he was older, I said he has done more good than I; if younger, I said I have sinned more; if richer, I said he has been more charitable; if poorer, I said he has suffered more; if wiser, I honored his wisdom; and if not wiser, I judged his faults lighter.’ ” (The Testament of Judah Asheri) 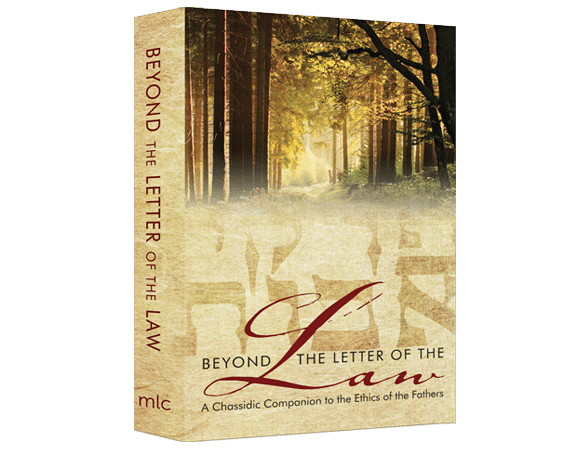 A Chassidic Companion to the Talmud’s Ethics of the Fathers
4.50 out of 5

Beyond The Letter Of The Law

Discover ideas on freedom, good and evil, truth, love, language, business, food, crime, and virtually every aspect of the endeavor of life.

This is the missing link I have been searching for!

A coin does have two sides after all. Night and Day.

Thank you Rabbi. This is a lesson well received.