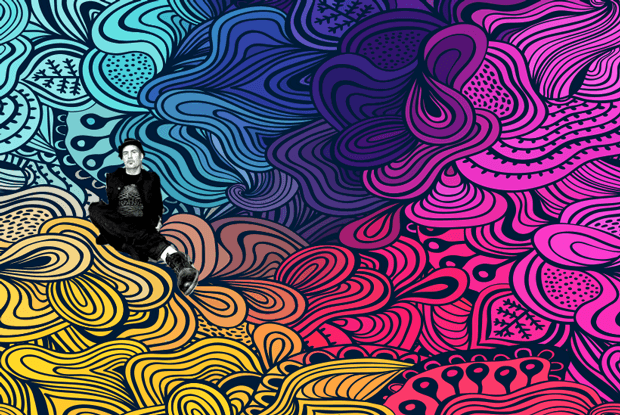 The class was given—and is still taught—by Rabbi Simon Jacobson, who was one of the Lubavitcher Rebbe Menachem Mendel Schneerson’s “oral scribes”: one who memorized each of the Rebbe’s talks, which couldn’t be written down or recorded on Shabbat or holidays. The talks, often in Yiddish or Hebrew, had to be memorized and translated as soon as allowed. “Peter was a tall, lanky guy from Minnesota, funny, a smart-alec and skeptic,” Jacobson recalled during a visit in his home the day after the gimmel tammuz, the Rebbe’s 20th yahrtzeit. The house is a short walk from Chabad world headquarters on Brooklyn’s Eastern Parkway. Around a large table there were bookcases with the well-worn Jewish texts familiar as a backdrop to Jacobson’s many video talks and classes. There are also video cameras, microphones, and laptop computer, the tools of modern outreach.

Jacobson described the Himmelman he met in 1985 as one who had seen the hypocrisy of the Judaism he had grown up with, being concerned more with paying for the synagogue’s wall-to-wall carpeting than with spiritual matters. Jacobson’s classes are more concerned with discussing Judaism in terms of purpose, “the gamut of existential and metaphysical subjects,” as he puts it. Himmelman stayed long into the night talking to Jacobson, who spoke about the Rebbe’s wisdom and mystical abilities. “I felt comfortable with Simon immediately,” Himmelman says. “He was witty and sharp and saw I was not antagonistic to Judaism. And because my dad died I was very receptive. But I still thought it was a cult.” Both Jacobson and Himmelman recalled the same decisive moment in their conversations.

“Can the Rebbe do anything?” Himmelman asked. “Can he fly?”

“I’ve never seen the Rebbe fly,” Jacobson replied. “But for the Rebbe, walking on the earth is as miraculous as flying.”

Jacobson continues: “Peter seemed to appreciate that miracle and he started coming to the class on a weekly basis.”

Himmelman, back in his Santa Monica home, offered his response to that story. He snapped his fingers and said: “I was in.” A few weeks after their first meeting, Himmelman told Jacobson he had started lighting Shabbat candles. It was Jacobson’s impression that Himmelman was making the candlesticks from broken beer bottles he found on the street in Hell’s Kitchen. Not exactly, Himmelman said. “I do recall using some beer cans for Shabbat candlesticks when we were opening for Gregg Allman,” he said. “Gregg was curious about their purpose.”

Soon, Himmelman would be “all-in” to observant Judaism. “I had emerged from this long, sad, fallow period,” he said. “A lot of grief. And it [Judaism] lifted my head out of it. It meant a lot then, and it means a lot today.” While the timing was perfect for Himmelman’s sense of inner peace and self-understanding, observant Judaism was not especially conducive to the work of being a rock star in the 1980s. Careers were built on touring, even when radio airplay, MTV, marketing, and promotion were still a factor, and everyone except shoplifters paid for the recorded music to which they listened.