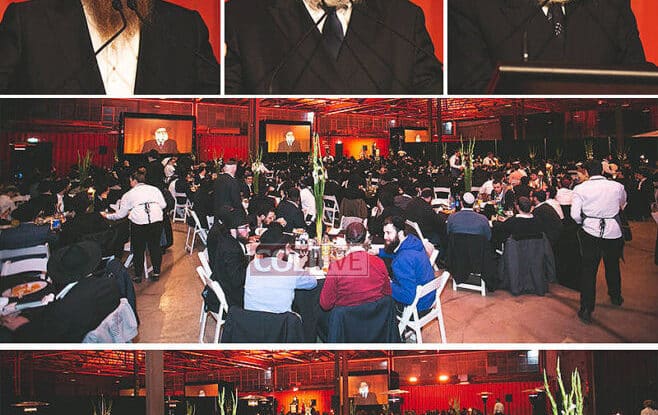 In a momentous and cohesive display of community Achdus, the Melbourne Chabad and general community gathered for a grand Melave Malka. The sold-out event at The Timber Yard, a landmark Melbourne venue, boasted over 700 people in attendance.

Master of ceremonies, Rabbi Shmuel Lesches of Young Yeshivah, opened the event by setting the evening’s theme, “Unearthing the Potential Within Each Individual,” focusing on the importance and uniqueness of every single Jew. Continuing in this vein, an inspiring new audio-visual collage entitled “Hidden Treasure”, tracking the journeys of four individuals, portrayed the Rebbe’s ability to unleash the power of the individual with his unwavering faith in their potential.

This theme was further developed by Rabbi Laibl Wolf, founder and dean of the Spiritgrow Wholistic Centre, and an international presenter in the fields of psychology, wellness and Jewish spirituality. Rabbi Wolf shared some of his own personal interactions with the Rebbe, affording the audience an intimate glimpse of the Rebbe’s devotion to guiding him in his journey of life.

The appetizing main course was served before the keynote speaker was introduced. Rabbi Simon Jacobson is the author of the best-selling book Toward a Meaningful Life, a publication that has sold over 300,000 copies to date in thirteen languages.

For over 14 years, Rabbi Jacobson served as Editor-in-Chief of Vaad Hanochos Hatmimim, responsible for publishing the talks of the Lubavitcher Rebbe. Beginning in 1979, he headed a team of scholars that memorized and transcribed entire talks that the Rebbe gave during Shabbos and Yom Tov, which afforded him the privilege of working in close association with the Rebbe as he published more than a thousand talks. Rabbi Jacobson spoke of the Rebbe’s leadership as it relates to the individual – the practical lessons that can completely transform our lives, and by extension, the lives of those around us. Rabbi Jacobson delivered his highly erudite keynote with his signature wit and down-to-earth manner presentation, which was eagerly received by the audience.

The delightful fully-catered menu, the atmosphere and program, as well as attention to every detail, contributed to the great success of the event. The Melave Malka was made possible by the tireless and devoted efforts of the Young Yeshivah committee.