NO PROGRAM: Yom Kippur
Back to the MLC News page 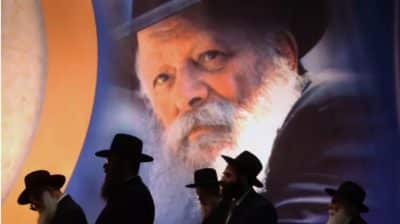 All across the globe – from the more than 50,000 visitors expected at his burial place in Queens, NY, to gatherings and study groups in community centers, synagogues, camps and private homes – people from all walks of Jewish life, in communities large and small, are coming together this week and next to mark the 25th anniversary of the passing of Rabbi Menachem Mendel Schneerson.

In keeping with Schneerson’s lifetime goals and teachings, millions throughout the world will be participating in prayers, lectures, gatherings, tributes and the additional performance of good deeds in Schneerson’s memory.

Rabbi Elie Mischel of Livingston, NJ, often talks about Schneerson and his impact from the pulpit of the Suburban Torah Synagogue, a Modern Orthodox congregation. Mischel sums up Schneerson’s impact this way: “The Rebbe was not only the Rebbe of Chabad but also the Rebbe of the entire Jewish people.”

“The Rebbe’s concern transcended the specific needs and issues of his devoted Hassidim and extends to every last Jew in the world,” he says. “The Rebbe was truly the … ‘leader of the generation,’ and his legacy remains essential to all Jews.”

In California, the dozen Chabad Houses that comprise Chabad of Conejo Valley and Ventura County will jointly host “An Evening of Unity and Inspiration” on July 10, which will unite a cross-section of people from all Jewish backgrounds.

“There is so much doom and gloom and friction in the world, but the Rebbe taught us to look on the brighter side and see the good in everyone,” says Rabbi Yitzchok Sapochinsky, director of Chabad of Westlake Village, California. “He believed in each individual, and we need to believe in ourselves.”

The power of positivity and Schneerson’s thoughts on the subject are at the heart of a new book, “Positivity Bias” by Rabbi Mendel Kalmenson, who will be one of the keynote speakers at the “Evening of Unity and Inspiration.” Also scheduled to speak is Salvador Litwak, a Hollywood screenwriter.

Like many other communities, the Southern California program is being held under the banner of “One Heart, One People.” That banner, says Sapochinsky, exemplifies what Schneersohn was all about: being one.

“We are trying to bring everyone together under one roof. At the core, we are one people, and the Rebbe taught us that,” he said.

A display of unity will also be seen down under as a standing-room-only crowd in Sydney, Australia, comes together to remember the Rebbe during a community gathering. Rabbi Simon Jacobson, the NY-based author of “Toward a Meaningful Life” and other works will join them to discuss five transformative and enduring lessons from Schneersohn.”

According to Rabbi Elimelech Levy, director of Chabad Youth New South Wales, “We all get caught up in the day-to-day grind of life and rarely have the chance to be deeply inspired,” continues Levy. “We hope that through Rabbi Jacobson, we will be able to bring people from all walks of life and give them the chance to be inspired by the Rebbe’s work.”

The largest gathering is expected to take place in Queens, at the resting place of both Schneersohn and his father-in-law – the sixth Lubavitcher Rebbe, Rabbi Yosef Yitzchak Schneersohn, with some 50,000 men expected to arrive there over the week.

A focus on education, welfare, students and soldiers

Throughout the year, hundreds of thousands of individuals, both Jews and non-Jews, frequent his resting place seeking blessings, spiritual guidance and inspiration. In addition to personal visits, Schneerson’s resting place annually receives more than 500,000 prayer requests via email and fax, and virtually all of the visitors this week will be bringing petitions for blessings from friends and family around the world.

While men have gathered at Schneerson’s burial place to mark the yahrtzeit, the anniversary of his death, every year since his passing, this will be the first time there is a concurrent program for women and girls. Some 400 women are estimated to have attended the “Shabbat of Reflection, Connection and Action” program led by Chabad emissaries from South Africa, Australia and Hawaii, at a hotel a few miles from the burial site.

Though he is known for his work in ensuring Jewish continuity and his love for the Jewish people, Schneersohn also made a significant mark on the world as a whole. His dedication to children with special needs – he advocated for the term years before it became part of the common lexicon – and his focus on education, welfare and those in the military who defend their countries earned him respect from world leaders. He was awarded a Congressional Medal, and the US National Education and Sharing Day was established in his honor.

Online, Schneerson’s visionary approach to many of the questions and challenges faced by society has been made available on the Chabad.org website, which combines hundreds of transcripts, clips of original footage and personal correspondence with Schneerson, highlighting how he applied the wisdom of Hassidic philosophy to real-world issues.

Among the topics addressed are mass incarceration, the importance of renewable energy and the imperative of transforming public education for the greater good.

In the 25 years since his passing, Schneerson’s influence continues to grow – extending to an ever-increasing number of people from across the religious and political spectrum. Writing this week in Tablet magazine, author Liel Leibovitz articulates the importance of learning and adopting what Schneerson has to teach, in principle and in practice.

“We need to follow in the footsteps of our elders,” whoever those elders might be, writes Leibovitz, “and listen to the Rebbe.”

“The lesson he bequeaths us isn’t an easy one to learn,” concludes Leibovitz, “but it’s one we can’t afford to ignore. For Jewish life in America, more imperiled now than ever before, to continue, we need to relearn how to love – each other, ourselves, and our tradition. It takes a very great rabbi to teach us that.”