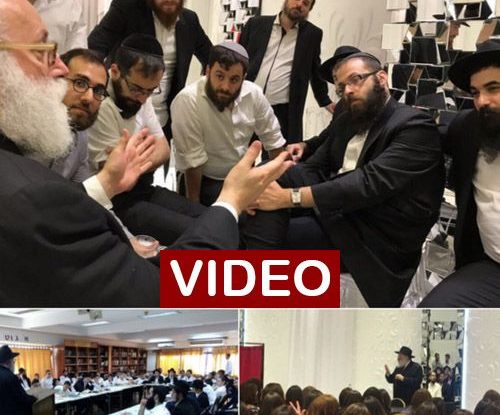 “Every shabbat is different,” says Michelle Mendeluk, a student at Machon Or Chaya in Buenos Aires. “There are indeed some special Shabbatot that feed not only minds, but also souls, in a deeper way, leaving a mark that lasts over time.”

One such Shabbos, she says, was the most recent one spoent with Rabbi Simon Jacobson, author of the bestselling book “Toward a Meaningful Life” and host of the “MyLife: Chassidus Applied” weekly webcast aired on COLlive.com.

Mendeluk said the noted author and lecturer’s speaking tour in Argentina,”had a great significance to me, as it left me thinking about ideas that we, as humans, usually leave behind.”

Rabbi Jacobson delivered 15 original talks over the span of 6 days to 1500 Argentinian Jews across the diverse communities of Rosario, Buenos Aires, and Cordoba.

The talks “touched Jews young and old, more affiliated and less affiliated, with a message that captured the depth of Chassidus yet with a practical application for every day,” said Rabbi Levi Silberstein, a shaliach in Buenos Aires and coordinator of the tour.

The whirlwind tour kicked off on the eve of Yud Tes Kislev itself, with a heartfelt farbrengen of 200 people at the Beit Chabad of Rosario—a city 100 miles from Buenos Aires—about the revolution birthed on 19 Kislev and how Chassidic thought provides us with vital tools to transform our lives and the world.

The next day, 250 women at a Beit Chana event in Buenos Aires were inspired by a talk on the pivotal role of the Jewish woman in the future of the world, dispelling myths and misconceptions about a woman’s role in Judaism, and defining a true definition of “feminism” — the leadership role women must take in our challenging world.

Following that, Rabbi Jacobson led a farbrengen with mesivta bochrim studying under Mashpia Rabbi Asher Farkash on the three major innovations of the Alter Rebbe’s Chassidus and their relevance to our lives.

“In teaching the message of Yud Tes Kislev, Rabbi Jacobson gave so much chayus and depth to so many people,” said Rabbi Farkash. “I was touched in particular by his talk to the bochurim, who came with their personal struggles—in their Judaism, their Chassidishkeit, their yeshivah life, their identity—yet Rabbi Jacobson was able to speak with them in a way that truly impacted them on a personal and practical level.”

Perhaps the most memorable highlight of the tour was the grand annual 19 Kislev banquet at the luxurious Hotel Panamericano, where Rabbi Jacobson enthralled the crowd with an impassioned talk about the majesty and relevance of Chassidus in our lives.

At one poignant moment, in the midst of discussing the power of a Chassidic melody to penetrate the heart and soul, Rabbi Jacobson began to sing a stirring Yom Kippur niggun and the entire audience—a roomful of 800 people—spontaneously joined in, united and uplifted in song despite their language barriers.

“I have rarely seen the audience so electrified,” said Rabbi Zalman Farkash, Mashpia, Yeshiva K’tanah, Buenos Aires, Argentina. They sat for hours—captivated, attentive, hungry for understanding, devouring every word. Deep, fundamental Chassidic teachings suddenly took on new meaning. Above all, there was an aura of joy that allowed the inspiration to be absorbed straight to the depths of the soul.”

After the banquet, Rabbi Jacobson farbrenged with attendees until the early hours of the morning, igniting heart-felt discussions on the importance of self-initiative and our obligation to make a revolution and bring Moshiach, among other themes.

On Shabbat afternoon, Rabbi Jacobson led a farbrengen in the main Chabad Shul in Buenos Aires, with over 200 people, lasting six hours, from one to seven in the evening.

“The Shabbos farbrengen was filled with stories and insights and messages so beautiful and profound that they cannot adequately be expressed in words,” said Rabbi Farkash. “There was an atmosphere of holiness and light that let hours go by without any of us us realizing it. We were just completely sucked into this beautiful, authentic Chassidishe farbrengen.”

Other talks and farbrengens throughout the week, some delivered in English and some in Hebrew, touched on a wide range of topics—the critical importance of finding one’s personal mission in life (a talk given to Machon Or Chaya students); how to understand and refine the DNA of our souls through the 10 spheres of the soul; the power of a tzaddik and the importance of making a keli for ourselves to elicit the powers from Above; how Chassidus can help with challenges of parnassa, family and intimacy (a talk for young Anash couples); and how to integrate a material and spiritual life, highlighting the importance of expressing individuality and finding one’s unique purpose.

“We stayed up late Friday, until 3am, talking with the Rabbi about how to find our mission in life and actualize our potential,” said Michelle Mendeluk, student at Machon Or Chaya. “I’m a journalist, and the Rabbi’s teachings gave me the strength to keep using my profession as a tool to spread meaningful messages to people, and to continue to fight anti-Semitism by telling the truth about Israel. However, I’m still in the search to find my mission.”

The common-thread message underlying all of Rabbi Jacobson’s talks—choosing a life with a higher objective and being fulfilled by one’s life’s purpose—resonated deeply with the Argentinian Jewish community, despite their diversity in age, background, and level of observance.

Having his book translated into 12 languages led to many of the event attendees to knew Rabbi Jacobson through the Spanish edition of the book, which has grown quite popular in Argentina.

“There is such a great demand in the world, including in Argentina, for Chassidus taught in a way that speaks directly to the personal challenges that people face in their lives daily. What a better time than the week of Yud Tes Kislev, the Rosh Hashana of Chassidus, to spread that message, to help people find personal meaning in the teachings of Chassidus?” he said.

“We were all deeply touched by the way Rabbi Jacobson gave over the warmth and passion of Chassidus, as well as motivated and empowered by the practical tools he offered,” said Rabbi Tzvi Gruenblatt, Head Shliach of Argentina. “Through stories, song and dance, Rabbi Jacobson left a resounding sentiment of Jewish pride in the South American country, where true achdus was felt, offering a small taste of the ultimate achdus, when all Jews will be reunited together in Jerusalem with the Immediate Redemption.”