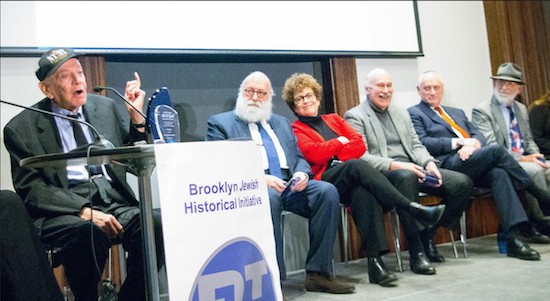 This article was Brooklyn Daily Eagle

Some were blessed to be born and raised in Brooklyn. Others, in the words of civil libertarian Ira Glasser, “made Aliyah to Brooklyn.”

Ten Brooklynites by birth and by choice were honored this week at the third annual Brooklyn Jewish Hall of Fame, held at the Brooklyn Historical Society.

This year’s format was different than in the past: Board members conducted interviews with eight of the 10 inductees, asking them about their vocations and what Brooklyn means to them. Two of the inductees, though unavoidably out of town, were still represented: Judge Judy Scheindlin sent in a video greeting, and BJHI board member Joe Dorinson interviewed ACLU activist Ira Glasser on his civil rights work on behalf of longtime colleague Norman Siegel, who could not attend the Nov. 14 event.

In her video message, Judge Judy spoke of the warmth of the community, and commended BJHI on documenting the lives of Jewish people who grew up in Brooklyn: “…So that our children and our grandchildren and their children will be able to grow up and see where we grew up and how we grew up,” she said.

Glasser and Siegel were executive directors of the both the New York Civil Liberties Union and the American Civil Liberties Union. However, Glasser said he got there “circuitously” after teaching math and editing a magazine. Civil rights were “visceral,” he said, flowing from his love of the Brooklyn Dodgers.

“I was 9 years old when Jackie Robinson was brought in. It wasn’t because I was interested in civil rights, it was because I was a Dodgers fan,” Glasser pointed out. “And they were attacking him. He was our guy. We grew up knowing what Robinson was going through.

“We participated as young kids in that whole drama. I learned about segregated public facilities, about segregated restaurants and hotels by listening to Red Barber on the radio describe the Dodgers games in St. Louis. And I discovered that when the Dodgers went to St. Louis, Robinson and Campanella and Don Newcombe had to stay in different hotels and eat in different restaurants. That’s when I first came to hate segregation,” he explained.

In the bleachers, however, there was no segregation. Once as a youth, Glasser sat next to an older black man smoking a cigar and they hugged every time Jackie Robinson hit a homer or “Duke Snider hit one over the scoreboard.”

Likewise, conductor Judith Clurman described her joy at seeing a Dodgers banner when arriving at the Brooklyn Historical Society on Tuesday. Before they moved further out on Long Island, Clurman’s family lived at Avenue U and East 16thStreet in Flatbush.

“I have, never felt that feeling any other place else in the world, because I got to know everybody in every apartment house, and everybody was my friend—and there were Italians and Chinese and Orthodox, there were Ashkenazim and Sephardim.  Everybody knew one another.”

“We were such big Dodgers fans,” Clurman said, echoing the reminiscences of her fellow honorees. “Even though we moved to Long Island, Brooklyn was part of our lives. Coming into this building, and the banner from the 1955 World Series is up — that’s as holy to me as a piece of sheet music — seeing that banner up. My father talked about it all the time.”

Eli Miller, who proved to be a most entertaining raconteur, famous as Brooklyn’s “Seltzer Man,” told the story of how as a youth he got into the business by taking a huge risk: coaxing the store manager into “lending” him 40 cases of a beer that was a favorite in Bedford-Stuyvesant at the time, and then selling those cases — on credit — to the black community there. When chastised, young Miller replied with an impassioned defense of black citizens. He then found his niche in the seltzer business for the next six decades.

Miller has since sold his seltzer business to Alex Gomberg, the youngest of the seltzer boys and founder of Brooklyn Seltzer Boys. Gomberg was on hand, complete with a table of seltzer bottles, syrups and milk, to make the famous Brooklyn beverage — egg creams. The secret technique shall remain his.