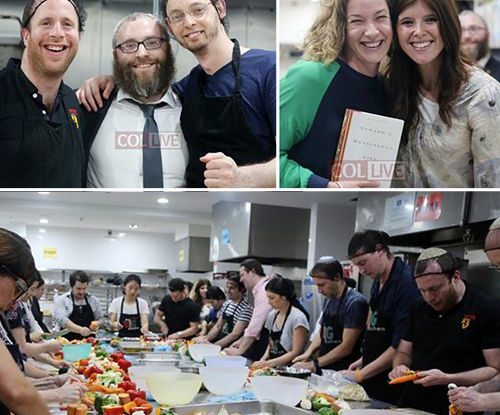 Mental health is a serious issue, affecting over one million people in Australia, many in the Jewish community alone. Mental illness such as depression, chronic stress, anxiety, paranoia, personality disorder and the like are, unfortunately, more common in our community then what many realize.

The potential embarrassment, negative stigma, fear and shame that the sufferers may experience when exposing their mental illness, is often the cause of not seeking help and subsequent treatment for their illness. Family, friends and colleagues may not even be aware that they are suffering in silence.

On Sunday, 29th October, a group of people passionate about helping others came together for an evening of unity, knowledge, awareness and cooking. CBDChabad, in conjunction with the Black Dog Institute and Our Big Kitchen, hosted a mental health awareness evening, ‘Challenge the Black Dog’.

The program kicked off with an outstanding introduction by George Karounis, informing attendees about the important work of Our Big Kitchen, and the effect that our cooking will and can have on those that would receive the packages. Participants then got their aprons and baking hats on and prepared a cooked meal, that would later be distributed to the staff at St Vincent’s Emergency Ward and the homeless residing in the city and surrounds.

Whilst the food was cooking, the Hon. Scott Farlow MLC, Chair for Parliamentary Friends of Mental Health and Parliamentary Secretary (Representative of the Premier of NSW), spoke to the crowd about the various mental health initiatives that the government are putting into action. The Deputy Lord Mayor of the City of Sydney, Jess Miller, addressed the crowd following this, and shared her inspiring life story and the importance of green space in the city, being surrounded by nature and it’s effect of mental health. She also spoke about various initiatives by the City of Sydney to promote more green space.

Participants then ate the gourmet dinner they had prepared and the night continued with informative and eye-opening presentations by Jarrod Meerkin, Exercise physiologist, on the importance and relationship between physical well-being and mental health, followed by Renee Mill, psychologist, author and blogger who took us on a very real journey through the eyes of someone suffering from depression.

The evening concluded with Evan Jackson, representative of The Black Dog Institute sharing his personal and heartfelt journey and the vital work that his organization performs for the wider community.

A presentation of the book ‘Towards a Meaningful Life’ by Simon Jacobson was presented to speakers by Rabbi Danny and Rebbetzin Sara-Tova Yaffe, as a small token of appreciation for the time and effort dedicated to the event.

‘Challenge the Black Dog’ would not have been possible without the support of the following people, who worked tirelessly behind the scenes, as well as sponsors for the prizes; Sydney IT Solutions, El Earl Photography, DCLA, MeasureUp Dexa, Harvey Norman, Magnolia Silver, Michelle Bridges, Cassie Mendoza Jones, Renata Munir and Audrey Bidaud for logistics.