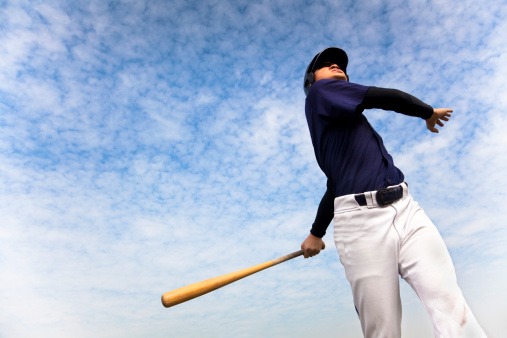 The following account (translated from the Hebrew weekly Kfar Chabad) is told by a man who met the Rebbe, Menachem Mendel Schneerson as a young bar mitzvah boy.

The first time I met the Rebbe we discussed baseball. It was a month before my bar-mitzvah, and my grandfather, a devout Jew and second-generation American, wanted me to meet the Rebbe and receive his blessing in preparation for my attainment of Jewish adulthood. My parents had all but abandoned religious practice of their faith, so it was Grand-father who assumed the primary role in my Jewish education, giving me lessons in the rudiments of Yiddishkeit several times a week and taking me to the synagogue on Shabbat.

My first surprise was the Rebbe’s youthful appearance. I had expected a chassidic sage with a long white beard, but the Rebbe, who was in his early fifties at the time, had the appearance and manner of a man 15 years younger. My second surprise was the Rebbe’s first question to me: “Which is your favorite sport?”
“Baseball,” I replied.
“How do you most enjoy the game,” asked the Rebbe, “when one team plays or when two teams play against each other?”
“Rabbi,” I said, “you can’t play baseball with only one team.”
“Why?” asked the Rebbe
“Rabbi,” I patiently explained, “the entire point of the game is which side is going to score more runs than the other. You must have two teams.” I was relieved to see that the Rebbe understood.
“So who usually wins?” the Rebbe pressed on.
“Whoever plays best,” I said, proud of my inspired reply.
I don’t know what Grandfather thought of our conversation, but the Rebbe continued to direct all his attention to me. “Tell me,” he now asked me, “do you and your friends play much baseball?”
“Sure. We play a lot.”
“Do you also go to watch the baseball games at the stadium?”
“Sure.”
“But why do you have to go watch others play, if you know how to play the game yourselves?”
Again I felt the frustration of needing to explain the obvious. “Rabbi,” I said, politely suppressing my smile, “when we play, it’s just a bunch of kids playing. With the Major League teams, its the real thing.”
“Joseph,” said the Rebbe, a warm smile illuminating his face, “your heart is a baseball field. There are two teams competing there: the ‘good inclination,’ the yetzer tov, and the ‘evil inclination,’ the yetzer horah. But up until now, it was a kids’ game. Now, with your bar-mitzvah, the real game begins. G-d is giving you a special gift—a major league yetzer tov, with the skills and talents to beat the yetzer horah and guide you through a righteous and constructive life. Remember, Joseph, just like in baseball: whoever plays best, wins…”

Grandfather repeated the Rebbe’s baseball analogy at my bar-mitzvah and I fondly remembered my visit with the young personable rabbi. Beyond that, I do not recall the Rebbe’s words making much of an impression on my 13-year-old self. But as two events in my young adult years were to testify, the Rebbe’s words affected me far more deeply than I was aware at the time.

The first event took place three years later, the 16th year of my life and my second in High School. My class had won a school-wide competition and was awarded a weekend trip to a luxurious resort in New Orleans. I came home that evening bursting with excitement and joy; my parents, however, received the news in uncomfortable silence. Finally, mother said to me: “Joe, there’s a problem. Yom Kippur is that weekend. As you know, we’ve always observed Yom Kippur. We fast and we attend services at the synagogue. We have never desecrated the holiness of the day, and we expect the same of you.”
“Mom,” I protested, “you don’t understand. This is an opportunity of a lifetime! All year we’ve been dreaming of winning this prize. I’ll never forgive myself if I miss it!”

The arguments at home continued all week. My parents said they understood how important the trip is for me; nevertheless, they maintained, there are certain hallowed values which one must set above all else. I countered that I’ve always kept Yom Kippur and I shall continue to do so all my life, but nothing will happen if I made this one exception for a once-in-a-lifetime experience.

In the end, my parents, who prided themselves with their liberal approach to child-rearing, said to me: “Joe, you know that we never forced our convictions on you. We’ve told you how we feel about the matter. Now, the decision is yours.” The “decision” was easily made: New Orleans, here I come!

The night before the trip I was watching a baseball game at a friend’s home. The game ended with a breathtaking comeback in the last inning by the team that had been trailing by several runs throughout the game. Over the cheering of the crowd we heard the broadcaster say: “Well, after all is said and done, there are no two ways about it in baseball: the team that plays best, wins!” Suddenly, I remembered my conversation with the Rebbe. I stayed home that Yom Kippur.

The second event took place five year later, during my college years. The year was 1962 and everyone on campus was searching for “meaning to life.” Two friends, who had fallen in with a group of Mormon missionaries operating on campus, invited me to a lecture and discussion. Soon I was attending regularly. My meager Jewish education was no match for their sophisticated presentation; soon I began to see my own faith as shallow, bourgeois and devoid of spiritual content, and theirs as inspiring and rejuvenating. The more involved I became, the more I felt that, for the first time, my life had meaning and direction.

My only problem was how to break the news to my parents. I knew that, liberal views notwithstanding, they would be extremely upset by my conversion. I decided to say nothing as of yet and wait for an opportune time to tell them of my new life. I even harbored hopes of eventually bringing them to see the light themselves.

Shortly before I was to be baptized as a Christian and Mormon, I played shortstop in our weekly baseball game on campus. We played atrociously and lost badly. As we left the field, I found myself walking alongside the captain of the winning team, slapping him on the back, and saying: “Well, there are no two ways about it in baseball: the team who plays best, wins!”

I was barely able to finish the sentence. I’m sure my friend wondered why I suddenly turned white. As did my Mormon teachers as to why I suddenly severed all contact with them.

Peace at Home: The Key to World Peace

The Power of Gratitude in an Ungrateful World

The Gift of Meaning