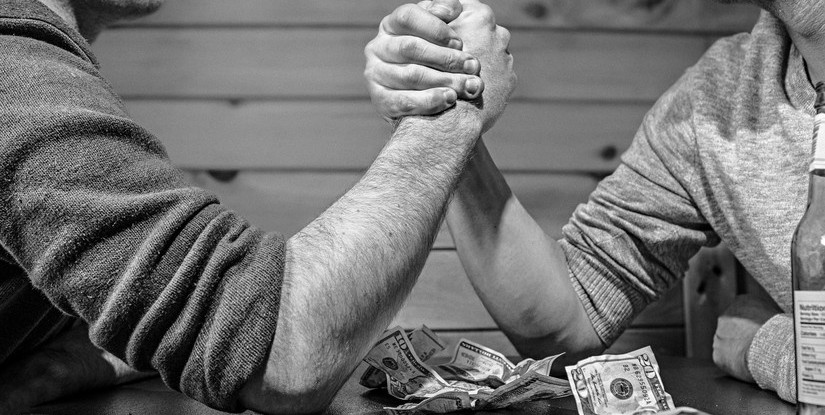 See, I am giving you today the blessing and the curse

The blessing and the curse: all phenomena, and all human activity, seem subject to categorization by these two most basic definers of reality. A development is either positive or negative, an occurrence either fortunate or tragic, an act either virtuous or iniquitous.

Indeed, the principle of “free choice”—that man has been granted the absolute autonomy to choose between good and evil—lies at the heart of the Torah’s most basic premise: that human life is purposeful. That our deeds are not predetermined by our nature or any universal law but are the product of our independent volition, making us true “partners with G-d in creation”[1] whose choices and actions effect the continuing development of the world as envisioned by its Creator.[2]

Philosophers and theologians of all ages have asked: From where does this dichotomy stem? Does evil come from G-d? If G-d is the exclusive source of all and is the essence of good, can there be evil in His work? If He is the ultimate unity and singularity, can there exist such duality within His potential?

In the words of the prophet Jeremiah, “From the Supernal One’s word/ there cannot emerge/ both evil and good.”[3] Yet the Torah unequivocally states: “See, I am giving you today the blessing and the curse”—I, and no other, am the exclusive source and grantor of both.

One approach to understanding the Torah’s conception of “the blessing and the curse” is to see how this verse is rendered by the great translators of Torah.

Aramaic, which was widely spoken by the Jewish people for fifteen centuries, is the “second language” of the Torah. It is the language of the Talmud, and even of several biblical chapters. There are also a number of important Aramaic translations of the Torah, including one compiled at the end of the first century CE by Onkelos, a Roman convert to Judaism who was a nephew of the Emperor Titus; and a translation compiled a half-century earlier by the great Talmudic sage Rabbi Yonatan ben Uziel.

In Onkelus’ translation, the Hebrew word kelalah in the above-quoted verse is translated literally as “curse” (lotin in the Aramaic). But in Rabbi Yonatan’s translation, the verse appears thus: “See, I am giving you today the blessing and its transmutation.” The author is not merely avoiding the unsavory term “curse”—he himself uses that term but three verses later in Deuteronomy 11:29, and in a number of other places in the Torah where the word kelalah appears.[4] Also, if Rabbi Yonatan just wanted to avoid using a negative expression, he would have written “the blessing and its opposite” or some similar euphemism. The Aramaic word he uses, chilufa, means “exchange” and “transmutation,” implying that “the curse” is something which devolves from the blessing and is thus an alternate form of the same essence.

In the words of our sages, “No evil descends from heaven”—only two types of good.[5] The first is a “blatant” and obvious good—a good which can only be experienced as such in our lives. The other is also good, for nothing but good can “emerge from the Supernal One”; but it is a “concealed good,” a good that is subject to how we choose to receive and experience it. Because of the free choice granted us, it is in our power to distort these heavenly blessings into curses, to subvert these positive energies into negative forces.

Onkelos’ is the more “literal” of the two translations. Its purpose is to provide the student with the most rudimentary meaning of the verse. The verse, in the Hebrew, says “the blessing and the curse,” and Onkelos renders it as such in the Aramaic. Anyone searching for the deeper significance of the negative in our world must refer to those Torah texts which address such issues.

On the other hand, the translation of Rabbi Yonatan ben Uziel provides a more esoteric interpretation of the Torah, incorporating many Midrashic and Talmudic insights. So instead of simply calling “the curse” a curse, it alludes to the true significance of what we experience as evil in our lives. In essence, Rabbi Yonatan is telling us, what G-d gives is good; but G-d has granted us the ability to experience both “the blessing and its transmutation”—to divert His goodness to destructive ends, G-d forbid.

This also explains why Rabbi Yonatan translates kelalah as “transmutation” in the above-cited verse (verse 26) and in a later verse (verse 28), yet in verse 29 he renders it literally as “curse,” in the manner of Onkelos. In light of the above, the reason for the differentiation is clear: the first two verses speak of G-d’s giving us both a blessing and a “curse”; but G-d does not give curses—only the option and capability to “transmute” His blessings. On the other hand, the third verse (“And it shall come to pass, when the L-rd your G-d has brought you into the land … you shall declare the blessing on Mount Gerizim and the curse on Mount Eval”) speaks of our articulation of the two pathways of life, where the “concealed good” can be received and perceived as an actual “curse.”[6]

On a deeper level, the different perspectives on the nature of evil expressed by these two Aramaic translations of the Torah reflect the spiritual-historical circumstances under which they were compiled.

Galut, the state of physical and spiritual displacement in which we have found ourselves since the destruction of the Holy Temple and our exile from our land nearly 2000 years ago, is a primary cause for the distortion of G-d’s blessing into “its transmutation.” When the people of Israel inhabited the Holy Land and experienced the manifest presence of the Almighty in the Holy Temple in Jerusalem, they experienced the divine truth was a tactual reality. The intrinsic goodness and perfection of all that comes from G-d was openly perceivable and accessible.

Galut, on the other hand, is a state of being which veils and distorts our soul’s inner vision, making it far more difficult to relate to the divine essence in every event and experience of our lives. Galut is an environment in which the “concealed good” that is granted us is all too readily transmuted into negativity and evil.

The translation by Rabbi Yonatan ben Uziel, also called the “Jerusalem Translation,”[7] was compiled in the Holy Land in the generation before the Temple’s destruction. The very fact that its authorship was necessary—the fact that for many Jews the language of the Torah was no longer their mother tongue and the word of G-d was accessible only through the medium of a vernacular—bespeaks the encroaching galut. The “concealed good” was already being experienced as something other than an expression of G-d’s loving relationship with us.

Still, in Rabbi Yonatan’s day the Holy Temple stood in Jerusalem. The descending veil of galut was translucent still, allowing the recognition, if not the experience, of the true nature of reality. One was aware that what one perceived as negative in one’s life was a distortion of the divine goodness.

The Onkelus Translation was compiled a generation later by the nephew of the Roman Emperor who destroyed the Holy Temple and drove the people of Israel into exile.  In Onkelus’ day, the galut had intensified to the point that the prevalent reality was that of a world dichotomized by good and evil, a world in which the “concealed good” is regarded as simply “the curse.”

“This concept is a fundamental principle and a pillar of the Torah and its commandments…. For were G-d to decree that a person be righteous or wicked, or if there were to exist something in the person’s inborn nature which would compel him toward a specific path, a specific conviction, a specific character trait or a specific deed… how could G-d command us through the prophets, ‘Do this’ and ‘Do not do this,’ ‘Improve your ways’ and ‘Do not follow your wickedness’…? What place would the entire Torah have? And by what measure of justice would G-d punish the wicked and reward the righteous…?” (Mishneh Torah, Laws of Repentance 5:14)..

[6] . By the same token, the other instances in which Rabbi Yonatan translates kelalah as “curse” (see note 3 above) likewise speak of human articulation and experience of evil; and the other instances in which kelalahis rendered “the transmutation” of blessing (e.g., Deuteronomy 30, verses 1 and 19), the verse likewise speaks of G-d’s granting us a twofold path for life.

[7] . Certain editions of the Chumash include both a “Translation of Yonatan ben Uziel” as well as a “Jerusalem Translation.” According to most commentaries, these are two versions of the same work.