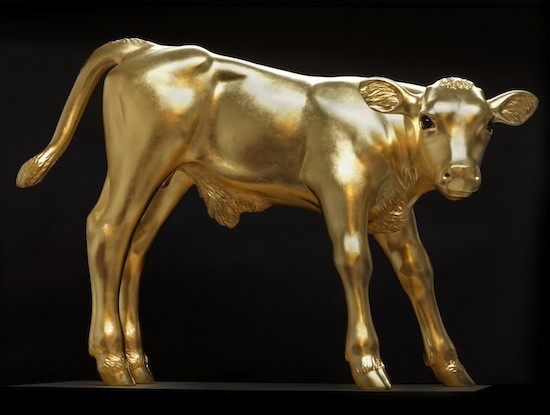 Much has been said how pain and loss often serve as wake up calls, making us aware of deeper truths. How about joy and success – what do they tell us about the human condition? When you are riding high and celebrating success, do you feel arrogant and self-important? Posturing as if you deserve all your blessings and taking them for granted? Or do they make you humble and gracious?

One of the ultimate barometers of life’s destiny is gauged by the way we behave in times of plenty. But the challenge is great: The complacency and false sense of confidence bred by success can be our worst enemy.

One of the saddest and most dramatic episodes in history is recounted in this week’s Torah portion: The building of the Golden Calf.

While Moses was communing with G-d on Mt. Sinai, the people below became restless and demanded “make us a god to lead us.” They brought their gold and it was molded into the cast of a golden calf – an idol – which they in turn began to worship.

A tragic moment indeed. At the most momentous event in history, when the greatest mandate of civilization was given to the human race, under the very shadow of Sinai, a nation of priests were indulging themselves, eating, drinking, prostrating themselves and taking pleasure before a… god made of gold.

Volumes have been written about this travesty. How was it possible that a highly evolved nation – a “knowledgeable generation” who personally witnessed and experienced the greatest revelations ever to take place, a people who had but 39 days earlier heard the Divine commandment “thou shalt not have other gods” – should so blatantly betray G-d?!

This paradox of extremes contains a profound personal and psychological message, as relevant today as it was then.

The Talmud offers us a truism (Sukkah 52a): The greater the person the greater his Yetzer Hara (evil inclination). The more powerful the experience, the more powerful the challenge. The same is true collectively: When a great nation experienced the unprecedented Sinai revelation, the forces of resistance arose in direct proportion to the magnitude of the moment.

The stakes were high: Sinai transformed existence. Until that point in time, matter and spirit were two distinct entities, with an impenetrable schism dividing them. At Sinai heaven wedded earth, and it enabled us to fuse matter and energy forever after.

Indeed, the Talmud explains that Sinai “ceased the [spiritual] toxicity” which entered human consciousness after the eating of the Tree of Knowledge (Shabbos 146a). Before Adam and Eve ate from the tree, their beings and psyches seamlessly flowed from their spirits. No dichotomy existed between who they were and what they did. Like an innocent child, they were not self-conscious, because their self was not divorced from their souls. When they ate from the Tree of Knowledge of good and evil, consciousness and self-consciousness was born. And with it entered the serpent’s “venom” – human reality became polluted with toxic self interest, which would devolve into the narcissistic source of all injustice and corruption. At Sinai, however, the spiritual smog lifted as the air was cleared.

But with every powerful experience comes an equally powerful resistance. Instead of humbly appreciating the moment, the people became self-satisfied and overconfident and proceeded to worship the Golden Calf, which allowed the toxicity to return (Zohar I 52b), replaying the first sin of eating from the Tree of Knowledge.

Each of us in our lives will be faced with similar challenges:

Sinai characterizes the special moments in our lives. The Golden Calf epitomizes self-worship – and the worship of man-made objects – instead of the awe and humility in face of the Divine. If Sinai represents our purity and innocence, the golden idol is the moment when we lose our innocence.

At times we will experience a “Sinai” moment of truth. Simultaneously, we must be wary that the dark forces within our psyches will come beckoning. Sometimes they will manifest in a voice of cynicism or skepticism, sometimes in a voice of arrogance or self-indulgence, at other times in a voice of cockiness and smugness.

All great moments bring great challenges. When we experience an epiphany, a moment of inspiration, a magical moment, always know that with it will come an equally powerful potent counter voice that will challenge you. Often when we are blessed with a special blessing, we take for granted our gift and let our guard down.

This is the majesty of great people. It is never about them personally. Even when their Divine cause emerges victorious, they experience profound humility.

Witness a person at his high point – at the epitome of joy – and you will see what he or she is made of. Does your success bring arrogance or humility?

Each of us will have Sinai revelations in our lives, a pollution-free beautiful moment. It may be falling in love, the birth of a child, a child’s wedding, a major breakthrough. At that moment you will have respite from the toxins of self-interest. But it will not be easy. For every positive voice there will be an equal cool voice tempering any enthusiasm. At that point the voice of the Golden Calf will come calling, knocking at your door. Every sin, every transgression, every human mistake has an element of the Golden Calf within it (Rashi this week’s portion 32:34).

And then you will have a choice: Will your grand experience cause you to worship yourself or will it humble you?

Will you use your power to abort the toxins of self-worship and self-interest that feed the fragmentation of our lives and of the universe? Or will you introduce the power of unity and integration?

What you do at that moment will define your life.

Over 3300 years ago at Sinai the people did not pass the test. Will we today?

In knowing the lofty and the depth of descent of our psyche or least the beginning of learning in regards to the subject; it gives us the knowledge and understanding to realize that ‘we must pursue the ‘All Truth’ of Torah’ and resist those times of negativity; to fight against the ‘ inclination of evil within each of our beings. Thank you for these teachings and I must let you know that I embrace Torah, as much as a Non-Jew can because I Love Truth!!!

So, the question remains…why was the tree of knowledge created? Could we have avoided our evil and negative behavior had it not existed?

Beautiful thank you! A gotten Shabbos

I am reminded of this: Good judgment comes from Wisdom; Wisdom comes from Bad judgment.
This was certainly true for a lot of us.
The forces of resistance equal to the force of the magnitude of the “Golden Calf” – success in the big city, while the cat’s away, the mice will play. The G-d of Abraham was having none of that – Moses in attendance or not. One must always wonder whether the whole Calf incident would have taken place if Moses had been around. Oh well, that’s one we’ll never know, and besides it’s a small issue in the face of a very huge LESSON in LIFE.
Thank you for “The Golden Calf”

Humility is Not Self-hatred

How Can We Say That “It’s Never Too Late” When There Are Mistakes That Cannot Be Reversed or Corrected?