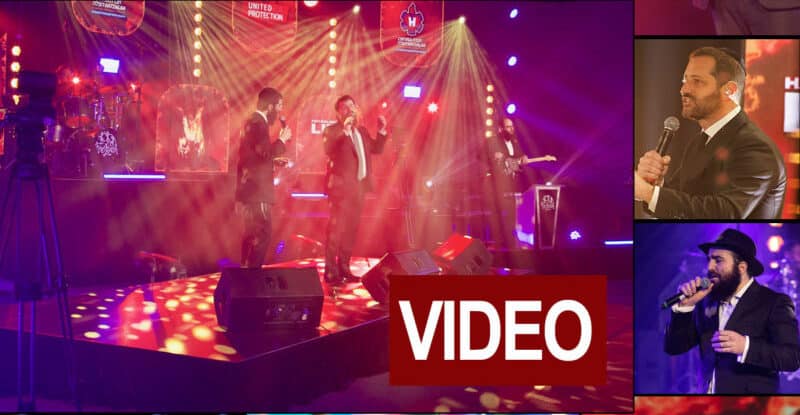 Ten million dollars was ambitious to say the least. With the economy grinding to a halt, an ostentatious fundraiser was gutsy enough; a goal that steep was daunting.

“We were hopeful for ten million to be honest,” said Shloime Greenwald of United for Protection (UFP), the group that began writing a Torah in support of those who need a recovery from Covid-19 and then led this week’s Hatzalah-Thon. “We knew people would show up for Hatzalah. But ten was our ceiling, our most optimistic hope.”

Davidi Crombie, who produced the concert, laughed. “When Shloime called me a week and a half ago and said he wanted to raise ten million dollars for Hatzalah, I said ‘Shloime, will all due respect, this is impossible.’ But he said we have to go ‘lichatchila ariber.’ So we went for it.”

On Monday evening, the Hatzalah-Thon campaign, built on Charidy.com‘s sophisticated platform with the assistance of their international team, was just a few hours in, and Greenwald and his fellow founders of United for Protection, Zalmy Cohen and Berel Junik, both of Crown Heights, knew that they were dealing with something unprecedented.

“I’m still trying to comprehend the scale of the achdus created here,” said Junik. “There were two million clicks across the six platforms streaming the event. Multiply that by family members and even adjusting for duplicate clicks and you are easily in the territory of millions of viewers.”

Greenwald waited to see the progress over the evening. The next day he gave the green light, increasing the goal by fifty percent to fifteen million dollars. By 11:30 PM on Tuesday, as Mordechai Shapiro danced on adrenaline alone on the stage, fourteen million dollars was reached. When the stream was finally closed and the musicians released to their homes, the count stood at $14,290,852.

“We are going to leave the page open until we clear fifteen,” Greenwald concluded.

It was a whirlwind two weeks for forty-seven Hatzalahs across the world. Jewish communities have grown accustomed to the diligence, professionalism, and expert care that Hatzalah provides. But they have rarely been feted the way they were on Lag Baomer. The reason for the spotlight is simple, explained Zalmy Cohen.

“After we completed the first Miracle Sefer Torah that united over 300,000 Jews, we had significant excess funds. We immediately knew we would give it to Hatzalah. This got us thinking that we have to do something huge to bring attention to Hatzalah’s role in this pandemic.”

The production was a logistical nightmare and feat. “A Lag Baomer miracle,” remarked Crombie, a realtor who dabbles in music production as a hobby. He laid out the obstacles that he and his team of over 150 had to hurdle.

“There were three challenges. One, we had to maintain social distancing for every singer, musician, and crew member. We constructed fourteen stages across the hall, in order to maintain a station of six feet for each person.

“Two: We had the goal of a 24-hour concert. This has never been done before in Jewish music. The Telethon by Chabad of California, for comparison, has about 8 hours of content. Industry experts told me a concert of this proportion would take six months of planning.”

The third challenge? “We had a week and a half to pull it off,” Crombie said.

A Lag Baomer miracle indeed. But Junik has a more rational explanation.

“Nobody on this team treated this as a job,” he wrote in a text sent out Wednesday morning to the people involved in the Hatzalah-Thon. “We all had a mission; a drive and a motive that couldn’t be stopped by anything.”

Crombie was reflective, “We did not sleep for a week and half. But Hatzalah volunteers do not sleep from the day they sign up. Like many people, I have called Hatzalah in a time of need. This was a once in a lifetime way of giving back.”

As the concert got underway, Crombie’s phone was blowing up with messages.

“Radio stations in Israel wanted to stream it live. We were getting calls from South Africa, Australia, Europe. We realized this was much bigger than we anticipated.”

The Monday evening segment hosted by comedian Modi, businessman Sam Stern and lecturer Rabbi Simon Jacobson was extended by an hour and a half. On Tuesday, the program was led by entertainer Yoely Lebovits and musician Chony Milecki. It went from having a scheduled finish at 7:00 PM to eight, then nine, all the way to midnight with Monday’s hosts.

“We were asking over one hundred and fifty performers, production professionals, and crew to stay for five more hours. It was surreal.”

“By all accounts, this was a historic occurrence,” says Mrs. Mica Soffer, Publisher and Editor of COLlive.com who led a team that directly raised close to $49,000, in addition to the general support.

“It wasn’t only the total amount that was raised that makes this so remarkable,” she says. “This was the first time that such a major recognition was shown to the selfless work of Hatzalah. It was also an unprecedented sign of unity having all of the chapters representing different types of communities join together.”

Hatzalah represents the best of the Jewish world. Famous for their swiftness, they are selfless, industrious, and discreet. The nature of their work sometimes allows for them to fade into the background of a community’s consciousness. Their sirens become part of the city din, they make calls in the middle of the night, they are in and out in minutes.

But over the past few months, Hatzalah has become impossible to forget.

“We would be in bed at night and hear the sirens go by,” recalled Milecki, the event’s program director and a host. “We davened for the victims from the safety of our home but couldn’t help but think of the Hatzala volunteers. What a tremendous risk they took. And it occurred to me. This is true love. This is Ahavas Yisrael.”

“When planning this event we wanted to do something different,” Milecki continued. “We weren’t interested in just doing another fundraiser. It had to be inspirational, spiritual, and engaging. And most of all an opportunity to grow. We recruited a talented team of writers and editors and put together fifteen video presentations, a hundred pages of script and guidance, a carefully curated musical repertoire, and over fifty performances. We even began the second Miracle Sefer Torah live on stage.”

Legendary music artist Avraham Fried had similar sentiments, “Chazal instruct us to stand in the presence of someone doing a mitzvah. I think I should stand whenever I see a Hatzalah member. They are a living, walking mitzvah.”

And the gratitude was heard. Central Hatzalah is the parent organization for the sixteen regional divisions within the city of New York, Nassau County, and the Catskills. Their backing, partnership, and support was critical in getting all forty-seven participating Hatzalahs on board with United for Protection’s proposal. Isaac Stern, a member of Central Hatzalah’s executive board, shared feedback from the field.

“I have been getting non-stop messages from hundreds of Hatzalah volunteers who are saying this is the most incredible chizuk they have ever received. Seeing this level of support and love has moved them deeply.”

Stern credits the three activists for spearheading a “campaign that has united all the Hatzalahs in a way never attempted before. The achdus this has brought Klal Yisroel is staggering.”

Here is what each Hatzalah branch raised in the unity campaign:

In a parallel campaign, Hatzolah Of Williamsburg raised $2,112,268

Out of the Darkness, Some Light

But host Rabbi Simon Jacobson, a member of the esteemed group of transcribers of the Lubavitcher Rebbe’s talks, feels that something has changed.

“I think the Jewish people made a statement that achdus is not a mere ideal, it is real. The walls between communities came down.”

And where do they go from here?

“The challenge is to create a perpetual impact. The world is ready for more. All of us have to use the energy and momentum to bring down the walls of golus, once and for all.”