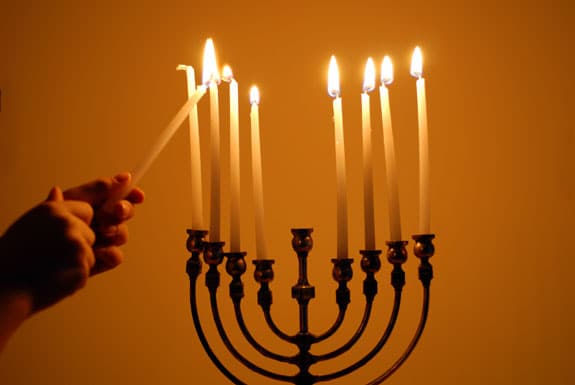 And G-d spoke to Moses, saying: “Speak to Aaron and say to him: ‘When you raise the lamps…’”

A daily feature of the service in the Beit Hamikdash (Holy Temple) was the kindling of the menorah. Each morning, a Kohen (priest) would prepare the menorah’s lamps for lighting. In the afternoon, the lamps would be lit, to burn through the night in expression of the Beit Hamikdash’s function to illuminate a spiritually dark world.

While many of the Torah’s laws are time- and place-specific, their significance is always eternal and universal. Physically, the mitzvah to kindle the menorah applies to a specific point in space (the Beit Hamikdash), and was implementable in specific periods of our history (the 1,309 years in which G-d’s manifest presence dwelled amongst us in a Mishkan or Beit Hamikdash[1]); spiritually, the imperative to “raise the lamps” applies to all locales and to all generations.

G-d’s instruction to Aaron to “raise the lamps” of the menorah is also a command to kindle the souls of his people—to ignite their latent potential to radiate light and warmth to their surroundings. Thus, Aaron is our model for man’s responsibility for the spiritual elevation of his fellows; in the words of the great sage Hillel, “Be of the disciples of Aaron: A lover of peace, a pursuer of peace, one who loves his fellow human beings and brings them close to Torah.”[3]

The equating of the stimulation of a dormant soul to the lighting of a lamp holds an important message to the lamplighter: do not think that you are achieving anything that your fellow could not, that you are giving him something he does not already possess. The soul of your fellow is a ready lamp, filled with the purest oil and equipped with the means of converting its resources into a blazing flame. It only lacks the proximity of another lamp to ignite it. If your own soul is alight, its contact with his will awaken its luminous potential, so that it may illuminate its surroundings and ignite other souls, in turn.

The eternal relevance of the mitzvah of “raising” the menorah’s lamps extends to its every aspect and detail: each of the many laws governing the lighting of the menorah in the Beit Hamikdash has its corresponding significance in the imperative to bring to light the potential of a fellow soul. Indeed, there are laws that can be truly understood only in light of their spiritual import.

Let us examine three such laws:

(a) Although the commandment to light the menorah was directed to Aaron, the most exalted and holy of the Kohanim, every Jew, including one who is not a Kohen, is qualified to perform this mitzvah[4].

(b) On the other hand, the task of preparing the lamps is entrusted solely to those whom G-d elected to serve Him in the Beit Hamikdash: only a Kohen is qualified to ready the lamps for lighting[5].

(c) From its outermost courtyard to its innermost chamber, the Beit Hamikdash consisted of eight domains, each imbued with a greater degree of divine immanence. The designated place of the menorah was the heichal, which was second only in this hierarchy of holiness to the kodesh hakadashim (“holy of holies”). Only Kohanim were allowed to enter the heichal[6].

Laws (a) and (c) result in a legal paradox: Since a non-Kohen could not enter the heichal, the only way for an ordinary Israelite to light the menorah was if he did so with the aid of long pole, or if the menorah was carried out to him by a Kohen and then replaced in the heichal. Hence, the obvious question: If the Torah intended that the mitzvah of lighting the menorah should be observable by every Jew, why didn’t it place the menorah in a less sanctified part of the Beit Hamikdash, to which the ordinary Jew has access? On the other hand, if the holiness of the menorah is such that it requires the sacred environment of the heichal, why did the Torah permit someone for whom this represents a higher standard of holiness than he is himself capable of attaining, to light it?

Law (b) is likewise puzzling: Should not the qualifying criteria to light the menorah be equal to, if not greater than, that of its preparation? If any Jew can light the menorah, why is only a Kohen qualified to prepare it for lighting?

A Kohen is a descendent of Aaron, designated by G-d to lead a wholly spiritual existence. “The Kohanim of the tribe of Levi,” G-d told Moses, “and the entire tribe of Levi,[7] shall have no share and lot [in the Land] with Israel… G-d is their lot.”[8]  Excluded from all earthly cares, responsibilities and privileges, the Levite’s is a life utterly devoted to “serve G-d, and teach His law to the community.”[9]

But there is also a broader sense to the station of Kohen.

“Not only the tribe of Levi,” writes Maimonides in his Mishneh Torah, “but any man of all the inhabitants of earth whose spirit has moved him… to stand before G-d, to serve Him, to worship Him, to know G-d and walk justly… and he cast from his neck the yoke of the many calculations that men seek—such an individual becomes sanctified, a holy of holies, and G-d shall be his portion and his lot…”[10]

Therein lies the eternal lesson in the law that the menorah can be lit also by an ‘ordinary’ Israelite. One might think that the task of igniting souls had best be left to the spiritual practitioner, to those whose entire lives are devoted to G-dly pursuits. What can the ordinary businessman, craftsman or laborer, himself enmeshed in the material and mundane, offer the spiritually wanting soul?

Says the Torah: Every soul is a “lamp of G-d,” regardless of the spiritual station of the life it animates. Every individual has the capacity to generate light and to ignite a fellow lamp. And if G-d has given you license and ability for the task, it is your sacred duty to do so. Never mind that the bulk of your life is taken up with the mundanities of a material existence; you too can, and must, serve as a teacher and lamplighter to your fellows.

However, one might take this to the other extreme, and say: if G-d allows, and instructs, that I, too, light the menorah, despite the material nature of my life, then I am free to do it on my terms—to interpret the Torah as I understand it and to spread its light in the manner that I see fit. Says the Torah: only the Kohanim, those chosen by G-d as the nation’ spiritual leaders, are qualified to prepare a menorah for lighting. Only they can decide the content of the message and the means of its dissemination. In all matters of Torah law and teaching, you must “come to the Kohanim, the Levites, to the judge that shall be in those times… and you shall do as they instruct you.”[11]

The place of the menorah is in the heichal, and while your natural place might be a less sacred environment, your license to light it is not a license to compromise its holiness. In Hillel’s words, a disciple of Aaron is one who “brings his fellow human beings close to the Torah,” not, G-d forbid, the other way around—one who brings the Torah down to the level of those he seeks to uplift.

On the other hand, the fact that the menorah’s standards are loftier than your own does not absolve you from your duties as a lamplighter. Your light must be employed to illuminate others, even if it means reaching into the heichal with a ‘long pole’—extending your reach to heights your ‘ordinary’ self cannot aspire to. Even if it means that the menorah must be ‘carried out’ to you by a Kohen to enable you to realize your potential as a luminary and an illuminator.

[7] The entire tribe of Levi was elected to serve G-d in the Beit Hamikdash. Among the Levites themselves, the Kohanim entrusted with the most sacred aspects of the Temple service