One Yom Kippur eve, when Chassidic master Rabbi Yaakov Yisrael of Kriminitz was granting the traditional blessing to his children, he noticed that one of his daughters, overcome by the 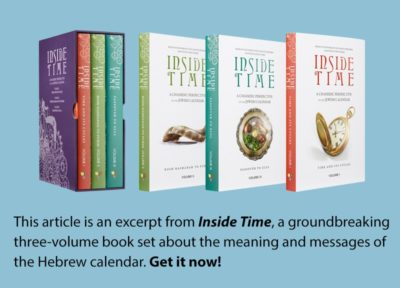 emotion of the moment, was weeping softly. The young child in her arms was also crying.

“Why are you crying, my child,” asked the Rebbe of the tot.

“My mother is crying,” answered the child, “so I am also crying.”

In the synagogue that evening, the Rebbe ascended the podium and related what his young grandchild had said to him. Bursting into tears, he then said:

“A child who sees his mother weeping, weeps as well, even if he cannot comprehend the reason for her tears. Our mother, too, is weeping. Our sages tell us that the Shechinah keens like a dove and cries: “Woe is to My children, that because of their sins I have destroyed My home, set fire to My sanctuary, and have exiled them among the nations.” “So even if we ourselves have become inured to the pain of the exile,” wept Rabbi Yaakov Yisrael, “at least we should cry because our mother is crying.”

[1] . The feminine aspect of the divine presence, which is the source of the souls of Israel.

In a small village in the backwoods of Eastern Europe, many hours’ journey from the nearest Jewish community, lived a Jewish family. Once a year, for the holy day of Yom Kippur, they would make the long trip to town in order to pray together with their fellow Jews.

One year, the villager woke bright and early on the day before Yom Kippur and readied himself for the journey. His sons, however, not quite as industrious as he, had slept in. Impatient to get on his way, he said to his family: “Listen, I’m going to set out on foot while you get yourselves together. I’ll wait for you at the large oak at the crossroads.”

Walking swiftly, the villager soon reached the tree and lay down in its shade to wait for the family wagon. Exhausted from several days of backbreaking labor, he fell asleep. Meanwhile, his family loaded up the wagon and set out. But in the excitement of the journey, they forgot all about their old father and drove right by the sleeping figure at the crossroads.

When the villager woke, evening had already fallen. Many miles away, the Kol Nidrei prayers were getting underway in the town’s synagogue. Lifting his eyes to the heavens, the old man cried:

“Master of the Universe! My children have forgotten me. But they are my children, so I forgive them. You, too, should do the same for those of Your children who have abandoned You….”

Those who arrived early at the village synagogue on Yom Kippur eve could not but notice the man sleeping in a corner. His soiled clothes, and the strong scent of alcohol that hovered about him, attested to the cause of his slumber at this early hour. A Jew drunk on the eve of the Holy Day? Several of the congregants even suggested that the man be expelled from the synagogue.

Soon the room filled to overflowing, mercifully concealing the sleeping drunk from all but those who stood in his immediate vicinity. As the sun made to dip below the horizon, a hush descended upon the crowd: the Rebbe entered the room and made his way to his place at the eastern wall. At a signal from the Rebbe, the ark was opened, and the gabbai began taking out the Torah scrolls in preparation for the Kol Nidrei service.

This was the moment that the drunk chose to rise from his slumber, climb the steps to the raised reading platform in the center of the room, pound on the reading table, and announce: “Ne’um attah horeissa!” The scene—the crowded room, Torah scrolls being carried out of the open ark—seen through a drunken haze, appeared to the man as the beginning of hakkafot on Simchat Torah! The drunk was confusing the most solemn and awesome moment of the year with its most joyous and high-spirited occasion.

The scandalized crowd was about to eject the man from the room when the Rebbe turned from the wall and said: “Let him be. For him, it’s already time for hakkafot. He’s there already.”

On the following evening, as the Rebbe sat with his chassidim at the festive meal that follows the fast, he related to them the story of Reb Shmuel, the Kol Nidrei drunk.

On the morning of the eve of the Holy Day, Reb Shmuel had heard of a Jew who, together with his wife and six small children, had been imprisoned for failing to pay the rent on the establishment he held on lease from the local nobleman. Reb Shmuel went to the nobleman to plead for their release, but the nobleman was adamant in his refusal. “Until I see every penny that is owed to me,” he swore, “the Jew and his family stay where they are. Now get out of here before I unleash my dogs on you.”

“I cannot allow a Jewish family to languish in a dungeon on Yom Kippur,” resolved Reb Shmuel and set out to raise the required sum, determined to achieve their release before sunset.

All day, he went from door to door. People gave generously to a fellow Jew in need, but by late afternoon Reb Shmuel was still 300 rubles short of the required sum. Where would he find such a large sum of money at this late hour? Then he passed a tavern and saw a group of well-dressed young men sitting and drinking. A card-game was underway, and a sizable pile of banknotes and gold and silver coins had already accumulated on the table.

At first he hesitated to approach them at all: what could one expect from Jews who spend the eve of the Holy Day drinking and gambling in a tavern? But realizing that they were his only hope, he approached their table and told them of the plight of the imprisoned family.

They were about to send him off empty-handed, when one of them had a jolly idea: wouldn’t it be great fun to get a pious Jew drunk on Yom Kippur? Signaling to a waiter, the man ordered a large glass of vodka. “Drink this down in one gulp,” he said to the Reb Shmuel, “and I’ll give you 100 rubles.”

Reb Shmuel looked from the glass that had been set before him to the sheaf of banknotes that the man held under his nose. Other than a sip of l’chayim on Shabbat and at weddings, Reb Shmuel drank only twice a year—on Purim and Simchat Torah, when every chassid fuels the holy joy of these days with generous helpings of inebriating drink so that the body should rejoice along with the soul. And the amount of vodka in this glass—actually, it more resembled a pitcher than a glass—was more than he would consume on both those occasions combined. Reb Shmuel lifted the glass and drank down its contents.

“Bravo!” cried the man, and handed him the 100 rubles. “But this is not enough,” said Reb Shmuel, his head already reeling from the strong drink. “I need another 200 rubles to get the poor family out of prison!”

“A deal’s a deal!” cried the merrymakers. “One hundred rubles per glass! Waiter! Please refill this glass for our drinking buddy!”

Two liters and two hundred rubles later, Reb Shmuel staggered out of the tavern. His alcohol-fogged mind was oblivious to all—the stares of his fellow villagers rushing about in their final preparations for the Holy Day, the ferocious barking of the nobleman’s dogs, the joyous tears and profusions of gratitude of the ransomed family—except to the task of handing over the money to the nobleman and finding his way to the synagogue. For he knew that if he first went home for something to eat before the fast, he would never make it to shul for Kol Nidrei.

“On Rosh HaShanah,” the Rebbe concluded his story, “we submitted to the sovereignty of Heaven and proclaimed G-d king of the universe. Today, we fasted, prayed and repented, laboring to translate our commitment to G-d into a refined past and an improved future. Now we are heading towards Sukkot, in which we actualize and rejoice over the attainments of the ‘Days of Awe’ through the special mitzvot of the festival—a joy that reaches its climax in the hakkafot of Simchat Torah. But Reb Shmuel is already there. When he announced the beginning of hakkafot at Kol Nidrei last night, this was no ‘mistake.’ For us, Yom Kippur was just beginning; for him, it was already Simchat Torah….”

really helpful i am planning a primary school assembly, thanks

We shouldnt sum a person up: he was drunk, and we would want to condemn him, but the reason was a beautiful one: he freed a family from bondage at the expense of seeming to break the letter of the law–but was faithful to its spirit. When we know this, our opinion of him changes completely. A moving story that brings tears and teaches a lesson.

It was the Mitteler Rebbe R’ Dovber of Lubavitch