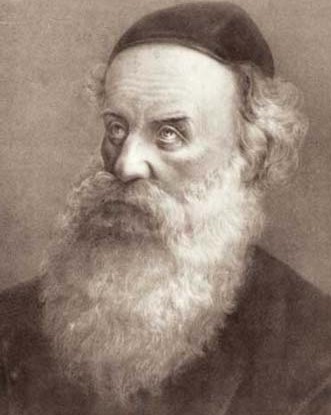 Rabbi Schneur Zalman, the founder of Chabad Chassidism, drew from all previous mystical and Talmudic teachings to create the most comprehensive blueprint for modern life, uniting faith and reason, spirit and matter. Deeply involved in the turbulent history of his day, author of the Tanya and thousands of discourses, Rabbi Schneur Zalman revolutionized every aspect of Jewish life.

~ 1745: Born on the 18th of Elul to R’ Baruch and his wife, Rivka, daughter of Rabbi Avraham.
~ At his Bar Mitzva celebration, the greatest scholars of the generation entitled him Rav tana upalig, meaning “He is equal in stature to the scholars of previous generations, and is entitled to disagree with them.”
~ 1760: Marries Rebbetzin Sterna, daughter of magnate R’ Yehuda Leib Segal and his wife Beila. Together they have 3 sons and 3 daughters.
~ Launches a vigorous campaign – with personal effort and his own funds – to encourage Jews to take up farming.
~ 1764: Visits Mezritch for the first time and becomes a disciple of Rabbi Dov Baer, the Maggid of Mezritch.
~ 1767: Accepts post of Maggid (preacher) of Lyozna.
~ 1770: Begins compiling the Shulchan Aruch [HaRav].
~ 1772: Defines the doctrine of Chabad Chassidus; begins campaign for Jews living in the Vitebsk area to
move across the frontier into Russia.
~ 1773-78: Establishes Yeshiva in Lyozna, known as Cheder I, II and III.
~ 1774: Travels to Vilna with R’ Menachem Mendel to Vitebsk to meet the Gaon of Vilna. The Gaon refuses
to meet with him.
~ 1783: Engages in the great disputation in Minsk and emerges victorious.
~ 1791: His writings on Talmud, Halachah and Chassidus are widely disseminated.
~ 1794: Publishes Hilchot Talmud Torah (Laws of Torah Study).
~ 1797: Publishes Tanya.
~ 1798: Arrested on the day after Sukkot; released on 19 Kislev.
~ 1800: Summoned to Petersburg on the day after Sukkot.
~ 1812: Leaves Liadi. After wandering with his family and many Chassidim, arrives in the village of Piena on 12 Tevet. Passes away after Shabbat on the eve of Sunday, 24 Tevet. Is interred in Haditz, Poltava Province.
~ 1813: His son, Rabbi Dovber (the Mitteler Rebbe) succeeds him as leader of Chabad Chassidim.
~ 1812- 2002: 5000 editions of Tanya printed worldwide in many languages.

Some Concurrent events in History:

If the Baal Shem Tov taught that each person has the power to access the Divine, Rabbi Schneur Zalman, founder of Chabad Chassidism, taught how this access can be achieved. Rabbi Schneur Zalman, also known simply as the Rav, the Alter Rebbe, or Baal HaTanya v’HaShulchan Aruch, developed what can be called the most comprehensive system ever – a blueprint for life today. Drawing from all the mystical and Talmudic teachings before him, the Alter Rebbe offers us in Chabad Chassidus (Chabad is an acronym for Chochma, Binah, Daat, the three defining faculties of the intellect) simply a brilliant and complete approach to living our lives to its fullest potential. He synthesizes the pure experience of the spirit with a deeply intellectual system, teaching us how we can unite faith and reason, spirit and matter in our struggle with physical life. Considered to be a ‘new soul’ (one that never before came to Earth), the Alter Rebbe revolutionized every aspect of Judaism. His life too reflected a critical time in history. He was imprisoned by the Czarist Russian regime and led the community through those difficult times. He took an active role in supporting Czar Alexander in the Russo-Franco War against Napoleon. In addition, he set an exemplary model for how to deal with an adversary, both among Jews and the Russian regime. The Alter Rebbe left us a voluminous amount of material. Beginning with his classic, the Tanya and a new rendition of the Shulchan Aruch (code of Jewish law), followed by thousands of discourses, Rabbi Schneur Zalman laid out a framework for infusing daily life with the deepest of mystical depths.

The Parable of the King’s Son

One day the Alter Rebbe was walking in the street together with his teacher, the Maggid of Mezritch, and another great Tzaddik, Rav Pinkus of Koritz. Suddenly Rav Pinchus spotted a sheet of soggy paper in the dirt, picked it up, and was pained to see the holy words of Chassidus laying in the gutter. Rav Pinkus questioned the Maggid’s policy of publicizing Chassidic-Kabalistic Torah ideas. The Alter Rebbe explained with a parable: “Once there was a great and mighty King who had an only son whom he loved with all his heart.
One day the boy fell ill and nothing seemed to help him. The best doctors were called in to treat him, but day after day their efforts unexplainably ended in failure. Needless to say the king was beside himself with grief. His beloved son was dying before his very eyes and he was helpless.
After several weeks, just as everyone had given up hope, an old man with a long white beard and a radiant face appeared in the king’s court. He approached the throne, bowed deeply and said, ‘Your Majesty please excuse me for not coming earlier, but I think I can cure your son. It will require a big sacrifice on Your Majesty’s part, and it just might be too late, but it’s Your Highness’s only chance.’
‘ANYTHING!’ Shouted the king, ‘Just tell me what it is I should do.’
The old man pointed to the top of the kings crown, where, set in gold, sparkled a huge diamond – The very symbol of the king’s greatness and splendor.
‘You must grind up that diamond,’ he answered.
A gasp went up from the crowd. When things quieted down he continued. ‘Then I must mix it in water and give your son to drink. There is very little chance of him opening his mouth, and even if he does, I can’t promise that he will swallow any. But if even the smallest amount goes down his throat, he will be healed.’
The king readily removed his crown, the old man removed the gem, prepared the mixture, and they all rushed to the sick prince’s bedside.
They watched anxiously as the stranger tried to open the unconscious boy’s mouth and pour the mixture in. At first it all trickled down his cheek, and onto his pillow and onto the floor. Then a bit seemed to get passed his lips, but he began coughing and this also he spit out. But finally he swallowed! And, true to the words of the old man and to the unbounded joy of the King, the prince opened his eyes and began to recover.”
“This is a parable explaining what you saw today,” continued the Rebbe.
“The King is G-d. The Prince is the people. The crown is Torah. The diamond represents its precious secrets. And the old man that healed the prince, is the Baal Shem Tov.
Like in the story, the people today are ill. Deathly ill. They have fallen into a spiritual coma.
The Baal Shem knew that the only remedy to revive the child is making the secrets of the Torah digestible for everyone; and that is Chassidus.
“But in the process, unfortunately, much may spill out. And that is why that page of Torah was laying in the gutter today.”
Later, the Maggid thanked his pupil profusely and told him that in heaven there was a decree against his policy. G-d created the world on the condition that the creation (both spiritual as well as physical) would conceal His Oneness, and the teachings of Chassidus were beginning to change that. Therefore the Maggid had opposition from heaven. But the Alter Rebbe’s parable abolished the decree.

I found the parable wondrous. The wise man, the healer, taking and crushing the diamond to a paste adding some liquid,made possible the sons recovery.
If the son could rouse his unconscious awareness, and with that understanding that his father the king bestows his power,and love for the saving of his sins life.much of the remedy was waste but the boy was able to be cured.

We folk must awake from sleep and stresses of this present time and take in the precious words of torah which can open our senses to G-ds love handed down in tanya, torah,holy texts,

We are all spiritually asleep. Only the ones who study Torah are conscience and awake. Every so often, the World is awaken by a diaster. They all plead to Hashem, HE, who never slumbers nor sleep comes to save the world and everyone soon forgets and returns to sleep. Those who study Torah never take their eye off Torah. They are not moved because Hashem is their Rock and Savior. Boruch
Hashem.

Amen Amen ! Tell people how easy and enjoyable it is to learn Torah ! People worry that they are not fulfilling their mission right ; how to just start takeling all the responsibilities? But at least learn Torah ! Such an easy and pleasurable way as opposed to actually going in an opposite direction. The best is to get up and do mitzvohs after learning Torah . But if a person will not , they can still avoid major sins by learning continuously. Thank you 😊 Shkoyach!!

All it takes is a little bit of Torah to change what is to what can be. HaShem speaks through your mitzvot and brings you great help and comfort when you least expect it but need it most. A little Torah clears your mind and allows you to focus your efforts inward and your prayers along with all Israel will reach Hashem.