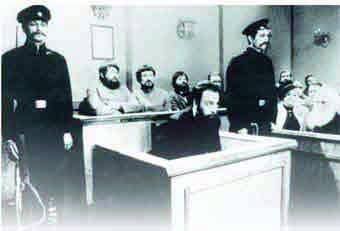 By the Grace of G-d

To the Arrangement  Committee

For the Memorial of the Great Advocate,

I have heard that those who cherish the name, and remember the great achievement of, that outstanding man, the giant among lawyers, the late Oscar Ossipovitch Grusenberg, may his memory be blessed, are about to honor his memory. Our sages say that people of merit should be honored, and especially those who do a mitzvoh for the Jewish people with utter self denial. It is our duty to pay tribute to them and cherish their memory and such a memorial  is a satisfaction to the soul of the departed.

Having personally visited the late Mr. Grusenberg in connection with the case of Mendel Beils, being sent to him in the company of my late friend, a well known communal worker and chassid , Rabbi Samuel, the son of Schneur Zalman Gurary of Krementchug, may his soul rest in peace,  I wish to associate myself with those who cherish his name and good memory, and to relate two interesting episodes of those terrible days, which will illustrate the purity of heart of that great Jew, the late Osher, the son of Joseph, may he rest in peace.

When we arrived to see Mr. Grusenberg, he received us with his usual cheerful courtesy, but as soon as we told him of the business of our visit, as a delegation of my saintly father the Lubavitcher Rabbi, in connection with the libel of Mendel Beilis, his face assumed a sad expression, the brightness of his clear eyes vanished and he sighed very deeply.

“I,” he continued, “though not living in the atmosphere of the very pious believers in miracles, who tell of G-d’s wonders or His people, I have come to the conclusion with absolute faith that only G-d alone watches over His people Israel.

“Our position, the position of the Jews living in this land, reminds me of a curious incident which happened when I was a boy of five: My parents with the entire family went to the country, near Poltava, my native town. There had lived for many years a Jewish storekeeper, a quiet honest man with a large family and a house full of boys and girls, big ones and small ones. His name was Berel Naphtoli’s and all the country people loved and respected him. There was, however, one anti-Semitic family who hated him, and one winter night they poured kerosene on the door of his house and set it on fire, with the intention of burning Berel and his family alive. Inside the house they were fast asleep, but suddenly, as if a heavenly hand nudged him, Berl Naphtoli’s woke up and saved his family from certain death. My parents then said, “Berel Naphtoli’s and his family were asleep, but the Guardian of Israel slumbers not, nor sleeps.”

“Similarly I say now, the enemies of Israel are pouring kerosene upon the House of Israel and their sole desire is to set it ablaze and destroy the Jewish people by false accusations and libels, but I firmly believe like any one of the pious believers in G-d’s wonders, that the Guardian of Israel slumbers not, nor sleeps.”

Mr. Gurary and I handed Mr. Grusenberg the letter of my saintly father, the Lubavitcher Rabbi, containing the following message:

“We all know that G-d is the Supreme Judge, nevertheless our Sages, the authors of the Talmud,   teach us that in every legal case, and needless to say in a matter of libel, we must choose the foremost and most gifted lawyer to defend the accused and save him.

“Every Jew, as a Jew, must do all he can for the benefit of his brethren, and more so one who has been gifted by the Almighty with outstanding capabilities.

“Our Jewish brethren are in trouble – the shameless blood libel, which our enemies have accused Mr. Mendel Beilis. All the world knows that it is not Mendel Beilis alone, nor the Russian Jews alone, that are accused of this charge of murder and blood thirst.

“This is not the first time that our enemies and haters have summoned our faith and our people to the court of law with the intention of exterminating us and our faith, but every time the good G-d provides us with a unique figure and great hero, who is willing to offer his life in defense of our Torah, our faith and our people, and G-d’s help crowns him with success.

“Now therefore you are G-d’s blessed messenger, the giant among lawyers, the lot has fallen upon you to be the representative of all the Jews in the world to ward off the terrible accusation of which we have been accused by our mortal enemies.

“You, our Jewish brother, Osher the son of Joseph, Grusenberg, have been chosen by the Lord our G-d to save His people. You with your great and clear intellect, with your eloquence and your heart which is conscious of the plight of your persecuted brethren, you will tear down the black mask which our enemies and the enemies of our Torah and faith seek to put on us. You have been chosen by the good G-d to make the truth triumph once more.

“Now please select the shining stars of the family of lawyers and arrange the defense in every respect. In the name of the Torah and my saintly ancestors, and in behalf of all our Jewish brethren and their Torah leaders, and in my own name, I send you our blessings, that the angels of life and peace, blessing and success welcome you wherever you turn in behalf of your brethren, the Jewish people.”

The letter made a profound impression upon Mr. Grusenberg. With obvious agitation he rose and paced the floor of his study, engrossed in deep thought. After some fifteen minutes he returned to his place and said quietly:

“The affairs of Kiev and the arrest of Beilis is like a desirable gem in the hands of our enemies. The Minister of Justice Stcheglovitov and his companion Suvarin, are already engaged in the selection of the prosecuting council, and although my Jewish heart tells me that it is my duty to take part in the defense, my sound and cold intellect tells me that my being a member of the defense council might endanger the situation, since the Minister of Justice may select also a jury among the enemies of Israel.”

My friend Gurary and I told him of the despair among our Jewish brethren in Russia and their great fear of the poisonous agitation carried on by the “Novoye Vromia” paper against the Jews, and that the news of his acceptance of the defense would restore their confidence and bring cheer to them all. After weighing the matter for some thirty minutes, Grusenberg finally agreed to take over the defense and arranging all matters connected with it.

1)      Council for the defense, selecting the outstanding lawyers of his age, Karabtschevsky, Maklakov and Zarodny.

2)      A committee of Rabbis and scholars with the great Gaon Rabbi Menachem Mendel Chein and the great Jewish scholar, Jacob Mase, crown rabbi.

3)      A committee of specialists in oriental languages and art and Jewish philosophy, Prof. Kakavtzov and Prof. Troytzky.

The greatest Torah leaders of Israel issued a call that Jews throughout Russia should say the Psalms in all the congregations during the days of the trial, and especially in the last day of it.

The last public hearing in the trial was held in one of the greatest halls of Kiev, in the presence of thousands of men and women and members of the highest spheres of government,

Mr. Grusenberg’s turn came, and with masterly legal erudition proceeded to break up the wall that the prosecution has built up, and concluded fervently:

“When I was approached to take over the defense, I declared that the prosecution would place its choicest lawyers, and especially from among the circles hostile to the Jewish people and its Torah, but the Jewish people are one and every Jew considers it his duty to sacrifice himself for his honest brethren. The G-d of Israel, the supreme G-d, demands justice and righteousness, I, Oscar Ossipovitch Grusenberg, am a Jew and from the bottom of my aching heart for the fate of our Torah  and our brethren, I call upon you, this court, to look through the window of truth which the members of council for the defense have opened in the wall of deceit that the enemies of the Jewish people have built up, accusing a guiltless man. From one end of the world to the other may my oath resound that we all Israel and Mendel Beilis are innocent of the hideous blood libel. Hear O Israel, G-d our G-d, G-d is One!”

The whole court room seemed to re-echo the mighty and clear voice of Grusenberg that shook with emotion, and hysterical weeping burst forth from many of those present.

The jury retired for deliberation. After the interval, amid solemn silence, the presiding judge announced the verdict: “The court has found the Jew Mendel Beilis innocent, Mendel Beilis is discharged.”

Half an hour after midnight, when hundreds of the students of the Yeshivah Tomchei Tmimim and in all the synagogues of Lubavitch, the following Psalms were recited, the happy news came by wire.

“Rabbi Schneersohn, Lubavitch:  Rabbi, mazal tov to you and all our Jewish brethren. The court found Mendel Beilis innocent. Mendel Beilis is discharged.

May the soul of Osher the son of Joseph rest in everlasting life with G-d, together with the souls of the good and righteous who offered their lives for the Jewish people. His memory, his faith in G-d and his devotion to the Torah and Torah-true Jews, may they be an inspiration to all his Jewish friends, the lawyer-community alive with us this day.