Vistas: Doing the Best You Can 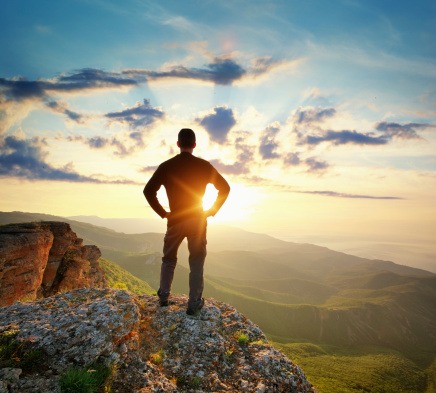 People think that teshuvah (repentance) is only for sinners. But even the perfectly righteous individual must do teshuvah—must return to elevate his perfect past to the level of his more perfect present

You stand in this moment. Many such moments lay behind you. Many more, G-d willing, before you. In each of these moments there is, there was, there will always be a choice. A decision of importance or one concerning a simple day-to-day task. A choice between disciplining your child or accepting his or her behavior as a natural part of development. A choice on how to spend ten dollars or an evening, whether or not to respond to a comment, ask a question or think a thought.

At a certain point you have lived long enough to have made many choices and to be able to see the consequences they have wrought. From this vantage point, elevated by maturity, you now see that every choice you made was made in ignorance. You recognize that the full impact of each choice was not seen at the time, and had it been, then perhaps another choice would have been made, or the same choice, but with much more trepidation, less spontaneity, and a total absence of frivolity.

The remorse this awareness brings drives you to seek audience with the Heavenly Court. An audience to seek forgiveness not for your sins, but for the decisions you made in wisdom, with consideration, with moral righteousness; for the actions you were so sure at the time were right. Only now, when you have lived long enough to see their consequences, when you are old enough to view them through a lens ground from experience and the wisdom and understanding that only experience can yield, did you see how very foolhardy you have been.

Children are the best example. Loving parents do for their child what they believe to be best. Their actions are considered, discussed, wrestled with. Expert advice is sought, no expense spared, every opportunity cultivated. And yet, as the years pass and your child grows, as his or her personality and character begin to emerge, as he or she faces life, succeeds, fails, rejoices and despairs, we, as parents, see the imperfections of our children, and our own failings. With our spouse, we sit late at night at the kitchen table, sipping our coffee, and talk of the things we could have, should have done. In great detail, we are able to trace each flaw and imperfection in our children to a choice that we made, an action we took, an opportunity we let slip by. And after we are done blaming ourselves and each other, ultimately we conclude that we did the best that we could. And in a strange way, this is the final dismay.

If you bothered to examine in similar detail the other choices you’ve made, you would come to the same conclusion. Each was flawed and limited and in its wake created consequences you could not foresee. Then, even though your mistakes and limitations could be excused by lack of knowledge, you would still desire to stand before the Heavenly Court and ask forgiveness. For these consequences, as unintentional as they may have been, are now very real and exist with  a life of their own.

And now, knowing this, you arrive at the decision that stands before you today: Your aspirations and what you do with them. Your child and how you treat him. Your wife. Husband. Work. Bank account. Friend. Neighbor. Mitzvah. Temptation. Vacation. Anger. Love. And all the rest.

You stand in fear and trepidation. You know that today’s choice will create a future reality that you cannot possibly know. You are about to release an arrow from the bow and you are already responsible for whatever target it hits, whether you aimed at it or not.

Poised to act, you have an image of yourself standing twenty years from now; prepared to release the arrow, you are already looking back, repenting your ignorance, the narrowness of your vision, the lowliness of your vista, the targets your arrow will strike as its flight continues past any destination you aim for. Yet the moment of choice has arrived. The time of action. The imperative of doing.

What do you do?

How can you possibly make a move? With the weight of this awareness, will you ever laugh again, be spontaneous, frivolous, fun loving, joyful?

Yet, miraculously, you act. You release the arrow. You laugh. You sing and you dance. Because ultimately, through your years, you have learned that G-d loves you. You are joyous precisely because there is a Heavenly Court before which you can stand and receive forgiveness and understanding and love. You laugh precisely because you know that behind the imperative of doing the very best you can is the futility of doing anything more than you can. You breathe deeply and release a smile because you know that G-d wants no more from you than you are able to do and has already given you everything you need with which to do it. You dance because this is your freedom: to dance your part in G-d’s creation with grace and courage and faith. And you sing knowing that you are only one voice in the chorus, and that the symphony is endless, ultimately perfect, yet paradoxically, dependent on you.

And finally you realize that the failings and limitations, errors and miscalculations, even the consequences that cause the blood to rush to your face in shame are also a part of your limited perspective, your narrow vision, your lowly vista. For if you could climb high enough you would see that the reason the Heavenly Court grants its forgiveness is that ultimately there is nothing to forgive.

From the highest plateau you would see that you are dancing your part perfectly. You always have. And you always will.