Simchat Torah: Through Water and Fire 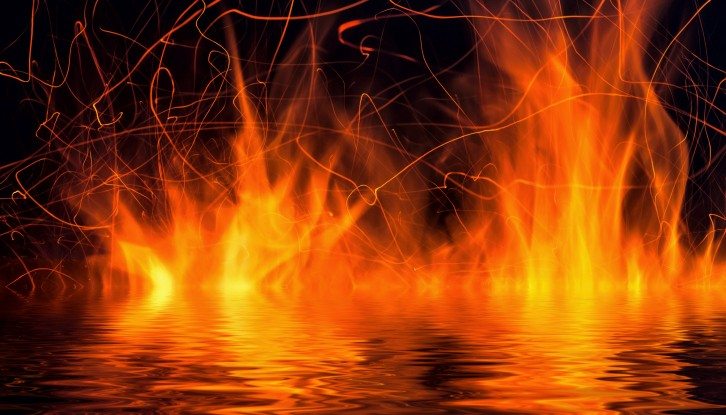 A young 14-year-old boy is keenly watching a man dancing as if there are no worries in the world. His legs pump in a rhythm only his soul could produce. He looks like a flame, flickering on and on, reaching for a place beyond anything he has ever known. Wow, the boy thinks to himself, “how could that man be so happy?”

“Which man?” His father asks him again.

“That man,” the young boy points to the whirling dancer. “He must be the happiest man on earth.”

As his father looks to where his son is pointing and he sees the black-bearded man with five children in tow, his eyes fill with tears and he sighs. “That man lost his young wife just six days ago.”

“But then how can he be so happy, how can he possibly dance like that?”

“Because today is Simchat Torah and it is a mitzvah to dance and to be happy. This is what a Jew does; this is what a real Chassid does.”

Although this story happened before I was born, I have heard it many times.

The year was 5730, 1969, and, on the second day of Sukkot, a young 42-year old man lost his wife to leukemia. As was the custom instituted by the Lubavitcher Rebbe, every year, on Simchat Torah, hundreds of Chassidim would walk near and far to celebrate with Jews in Synagogues across New York. This man was one of those Chassidim. Each year Simchat Torah he would take his young children to a small shul in East Flatbush where they would dance with the Torah and rejoice with the community. That year, 1969, the young man did the same. The children’s grandmother, their mother’s mother, dressed them in their finest clothing and sent them off with their father to East Flatbush.

It was there, in that little shul, that this dialogue between father and son took place.

After the dancing was over in East Flatbush, the young man and his children walked back to Crown Heights. He dropped his younger children off at home with their grandmother and hurried to 770 where the Lubavitcher Rebbe was in midst of a farbrengen. Every year on Simchat Torah, before hakofot, the Rebbe would speak for a number of hours, discussing the intricate energies of Simchat Torah and hakofot. The farbrengen would consist of several talks, each one punctuated by the singing of a niggun, a Chassidic melody sometimes dating back hundreds of years. The man of whom we are speaking was the one who began the niggunim at the Rebbe’s farbrengens.

The shul at 770 Eastern Parkway was packed from floor to ceiling; people were clinging to bleachers and rafters just as they did to the Rebbe’s every word. As the Rebbe finished one segment of his talk, the crowd looked to the new widower to begin a song. What happened next was one of the most dramatic experiences in the lives of those who attended that gathering. A rare moment of truth…

Through the hush of thousands of people, a gentle but defiant voice began to sing:“Mi vadiom nye patonyem, ee v’agniom nye s’gorim,” a vibrant Chassidic Russian melody meaning, “We in water will not drown, and in fire will not burn.” The Rebbe looked up and stared at the man – with a piercing, knowing gaze that is impossible to describe. Suddenly the Rebbe sprang up from his chair, pushing it back with such force that it nearly fell over. The Rebbe began dancing in his place, rocking up and down, swaying back and forth, with incredible intensity and passion. Witnesses say that in all the years the Rebbe never danced – never before and never after – quite like that.

People present later described the unbelievable sight of this fragile man who had just experienced utter devastation, swinging back and forth – surrounded by waves of people, being led by the Rebbe himself – singing: “We in water will not drown, and in fire will not burn,” nothing can vanquish our spirit – as if G-d had not just taken his wife, as if he was the happiest man alive.

Everyone melted in the dance and the song. The joy and the tears all dissolved into one transcendent dance; a dance that captured the essence of joy and pain, ecstasy and agony – the indestructible core of life itself. At that moment everything and nothing made sense. “Mi vadiom nye patonyem, ee v’agniom nye s’gorim,” “We in water will not drown, and in fire will not burn.”

A phone call comes in to a major Jewish children’s organization in Crown Heights, Tzivos Hashem.

“Hello,” the voice on the other end of the line says. “I am so-and-so and I would like to sponsor children’s programs for Simchat Torah,”

“Ok, sure,” the man working in the organization happily replies. “But, if I may ask, why do you have this particular interest in children’s programs for Simchat Torah?”

“Well, you see, when I was a boy, every Simchat Torah my father and I would go to a small shul in East Flatbush to celebrate. One year, when I was fourteen, as I was watching the few people dancing in a circle, I noticed one man who looked so happy, as if everything in the world was perfect. I stood there transfixed, wondering how this man could exude so much joy. I asked my father this question, and my father told me that I should know this man just lost his wife but, because he is a real Chassid and the Torah says to be happy on Simchat Torah, he is happy. This made a very big impression on my 14-year-old mind – that a Jew could put aside all his pain and suffering and be happy just because it’s a mitzvah to be happy was unbelievable to me – so I decided I would like to help other children celebrate the happiness and joy of Simchat Torah.”

On the 23rd of Cheshvon, 5767, 2006, the man of this story, Rabbi Zvi Hirsch Gansbourg, the one who lost his wife in 1969, rejoined her in the Garden of Eden. Yet, his (and her) grandchildren, their “life,” live on. They have built families and communities, changed people’s lives, and continue to make the world a better place.

The story of the young man has taught me much: even in the saddest of times, even when all seems lost, with a little joy, a little dance, everything can change.

And it’s true, “We in water will not drown, and in fire will not burn.”

How do I know? you may ask. Because I myself am living proof. You see, my mother was the youngest of those five children that walked with their father to that small shul in East Flatbush those 41 years ago.

I rose early in the morning, read this and wept.

Thank you for this story….a beautiful tale of being and sharing joy when every ounce of you feels otherwise. We go against our nature at these critically important points in time BECAUSE of the blessings and extra merit they bring. Because we are alive, thank Hashem and we MUST continue to show up when we most want to fall.. What happens is the grace of the memory in the ones who witnessed this mans dance and the ongoing life he gave his wife in the hearts and memories of all. Bless you for sharing this beautiful tale of the commitment to, and power of Simchat Torah.

What an amazing and comforting story, to be happy because it is commanded, to live because we must and to acknowledge the Torah truth – Through fire, we shall not burn and through water, we shall not drown. Thank you Rabbi Jacobson.

You omitted the following part of the story.The person who answered the phone at Tzivos Hashem was introduced to yidishkeit by Shluchim in the city he lived. They are the daughter and son in law of the same Tzvi Hirsch Gansbourg!

Well told! Much nachas to Rabbi Gansburg ע ה and the gantza mishpacha.

Although I am not Jewish, I was interested in what Simchat Torah meant. This story above is one of the most incredible stories I have ever read. Thank you for sharing.