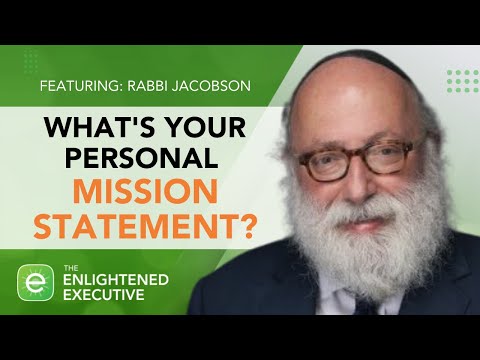 LAUNCHING A COMPANY WITHOUT A CLEAR MISSION STATEMENT IS A RECIPE FOR DISASTER.

Yet, so many of us walk around as individuals without a clear “mission statement” for our lives… and then wonder why we don’t feel fulfilled or motivated.

This lack of personal mission is what Rabbi Simon Jacobson views as one of the biggest problems leaders face today, with consequences for both their professional capabilities and personal happiness.

Jacobson is the founder of The Meaningful Life Center, which has been called a “Spiritual Starbucks” by the New York Times because it makes spirituality accessible for everyone.

In our interview, Jacobson reveals that clarity on individual meaning, purpose, and mission have been shown to be incredibly impactful for leaders. Increasingly, corporations and organizations discovered that when their teams feel passionate and connected to what they do, productivity increases significantly.

For example, Jacobson shared the story of a corporate leader who took the advice given in his book, Toward a Meaningful Life, to insert charitable giving into daily office life via a charity donation box in the office.

After doing this, the leader discovered that business improved. Why? Because the charity box sparked conversations and connections among everyone who came into the office, including clients, that led to greater productivity and more successful meetings.

In short, humans need meaning to thrive, especially in the workplace. It’s up to leaders to not only find meaning for themselves, but also to help create it for their teams.

HOW THE PANDEMIC HAS AFFECTED THE SEARCH FOR MEANING

Rabbi Jacobson shared how the pandemic led many of us to seek out a deeper meaning for ourselves because our “security blankets” were stripped away (such as social habits). Despite how much grief the past year has brought, Jacobson is optimistic that it may have finally forced some to make space for meaning.

In fact, Jacobson says that constant busyness and focus on one’s outer life is the biggest hindrance to finding meaning in today’s world.

This is not an episode you want to miss!