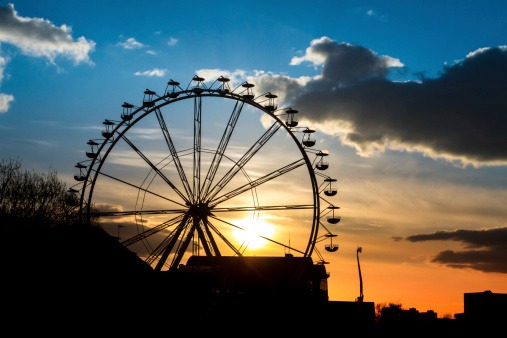 There is a wheel that turns in the world
Talmud, Shabbat 151b

In August of 1940 the Previous Rebbe, Rabbi Yosef Yitzchak of Lubavitch, wrote the following letter to Mr. Harry Hirsh, Chief-Editor of the newspaper Das Yiddeshe Licht (The Jewish Light). The newspaper had gone bankrupt, leaving Mr. Hirsh in a state of depression close to despair.

The Giant Wheel of Vienna

In Vienna in the garden of the city there are many wondrous things. Amongst them there is the “Riesenrad”, the Giant Ferris Wheel, a landmark of the Austrian Capital. Its silhouette rises to the sky and is seen from afar, so the wheel is a special attraction for everybody coming to Vienna. No one can properly claim to have been to Vienna unless he had “ridden on the Riesenrad.” High above the ground on the sides of the wheel, are attached cabins, which have glass walls providing the rider a panoramic view. As the wheel begins to rotate the attached cabins turn too. At its pinnacle height, it offers a magnificent view of the whole city and the landscape beyond. In this manner – as the wheel turns with the cabins going up and down – the Giant Wheel whirls away giving riders a wonderful view of this fine city.

The Wheel of Life

Our Rabbis say, “There is a wheel that turns in the world.” The wheel of life turns, and along go the cabins with their passengers, up and down throughout the experiences of life. The nature of man is such that when he is in on the top of the wheel, he is in good spirits – he is happy and good-hearted. But in truth he is only a fool for feeling so, for his cabin is attached to a wheel that is constantly turning. One whose cabin is on the bottom and is crying about his plight is also a fool, for his cabin is permanently attached to a wheel that is turning. With G-d’s help the good day will come and his cabin too will reach the top.

The truth is we must strengthen our belief, hope and trust. Together with this we must do all we can as opposed to sitting with folded hands, crying about our past. With the help of G-d I see your work coming to fruition for the good of the community; strengthening Judaism and spreading Torah with awe of heaven; which I live for – it enlivens my soul.

With these words, the Previous Rebbe inspired Mr. Hirsh to continue pursuing his career. A month later he became editor of a prominent Anglo-Yiddish newspaper that bolstered Jewish spirits throughout the Holocaust period. Under the pen name A. Levitt, he used his talents in a more positive venue. With the Rebbe’s encouragement and support, he wrote a book on Genesis 1 1942.] that inspired many to return to their roots. The book proved the existence of G-d, Divine Providence, and the Torah’s eternal truth.

The analogy of the wheel is applicable to our personal lives and also, on a more cosmic level, to all of history. In 1982 on Parshat Ha’azinu which is read this week, the Rebbe Menachem Mendel Schneersohn elucidated on this theme 2 “…In these days when one sees the redoubled darkness of exile in our times it is clear that we find ourselves in the last days of exile. Since the darkness is at its lowest ebb and it is not possible to get any lower, the time of the Redemption will surely begin now. This is understood from the analogy of a ‘turning wheel.’ When one is in the middle of the wheel, it is possible to go up or down, however, when one is on the lowest point of the wheel whichever direction it turns you will ascend. Since we have hit rock bottom it is now time to go upwards.”